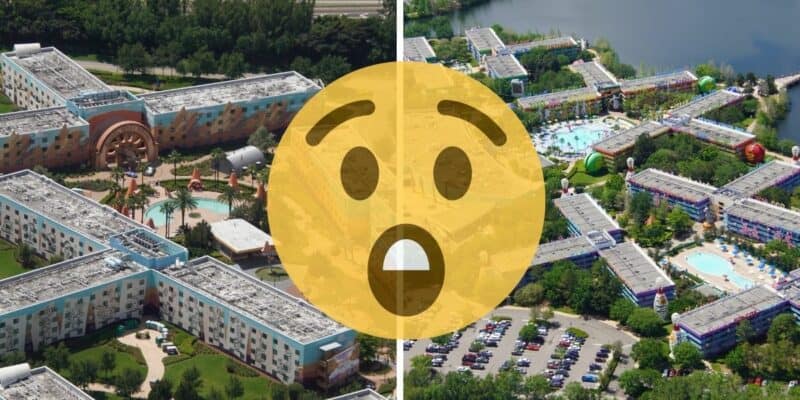 The Walt Disney World theme parks — Magic Kingdom, EPCOT, Disney’s Hollywood Studios, and Disney’s Animal Kingdom — have been flooded with Guests as of late due to spring break crowds. We have not only reported on ride lines taking over the Parks, but transportation lines extending throughout select Disney World Resort hotels.

But after the morning rush, during mid-day, most Guests are visiting the theme parks, leaving the Disney Resort hotels “abandoned”.

Aerial overview of All Stars Resorts.

Over at Disney’s Art of Animation, we can see the Cars section of the Resort hotel, which looks abandoned. Bioreconstruct shared:

Aerial look at the Cars section of Art of Animation resort.

Aerial look at the Cars section of Art of Animation resort. pic.twitter.com/9nXX5sdtYz

And the sister Resort — Pop Century — also looked empty, which you can see in the image below:

Aerial photo of some of Pop Century resort.

Aerial photo of some of Pop Century resort. pic.twitter.com/8E7GRIA79n

Keep in mind that when Walt Disney World and Disneyland reopened to Guests after temporarily closing due to the ongoing pandemic, the theme parks implemented a new reservation system to help monitor Park capacity called the Park Pass system.

Now, in order to enter a theme park — including Magic Kingdom, EPCOT, Disney’s Hollywood Studios, or Disney’s Animal Kingdom — at Walt Disney World or Disneyland Park and Disney California Adventure at Disneyland, Guests must not only have valid Park admission, but a valid Park Pass reservation.

And in 2020, Chairman of Parks, Experiences and Products Josh D’Amaro indicated that the newly implemented Park Pass system is a “new normal” that isn’t going away anytime soon, if ever, so Guests should get accustomed to utilizing the Disney Park Pass system if they are planning a trip to Walt Disney World.

Have you visited Walt Disney World recently? Let us know in the comments below.