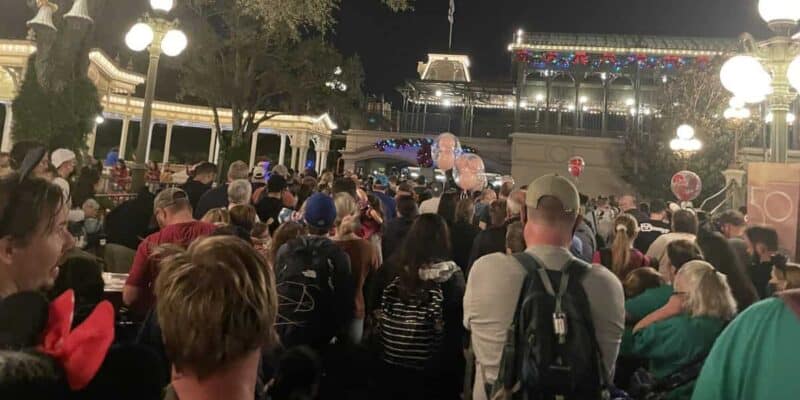 We have seen a massive increase in crowd levels at Walt Disney World’s theme parks — Magic Kingdom, EPCOT, Disney’s Hollywood Studios, and Disney’s Animal Kingdom — over these last few months, which is frustrating many Guests. Now, one Disney World Guest is threatening to not return to Walt Disney World until they get the crowds under control.

Due to the current crowd levels, some Guests are thinking of steering clear of Walt Disney World until the crowd levels become “under control”.

“[We] just got back home from our trip to the Parks last week. It was rough!,” the Disney World Guest explained. “My wife and I decided that we are not going back again until Disney gets the crowds under control. ”

Inside the Magic has been reporting extensively on the current crowd levels at Magic Kingdom, EPCOT, Disney’s Hollywood Studios, and Disney’s Animal Kingdom, which seems as though it will become a regular occurrence as we quickly approach spring break and summertime.

“The parks were so crammed to capacity that we could hardly even move,” the Disney World Guest continued. “We were constantly tripping over people and the standby ride lines were ridiculously long. I can’t imagine what it will be like during spring break in a few weeks.”

We do want to note that Disney recently confirmed that the theme parks are still operating at a reduced capacity, and will continue to do so moving forward. During the Morgan Stanley’s 2022 Technology, Media & Telecom Conference, Disney CFO Christine McCarthy stated that Park’s capacity would never return to normal as they are “managing things differently now”. She went on to explain that they do “not want to have the Parks bursting at the seams”, and by keeping a reduced capacity in place, Guests can have a more enjoyable time.

One of the main downfalls to full Park capacity never returning is that prior to the reduced capacity put in place, Guests rarely had to deal with an “at capacity” Park.

Now, however, Disney Park Passes are booking up extremely quickly, meaning Parks are at capacity frequently.

Although the Parks are crowded, Magic Kingdom, EPCOT, Disney’s Hollywood Studios, and Disney’s Animal Kingdom at Walt Disney World, and Disneyland Park and Disney California Adventure at Disneyland Resort are still operating under a reduced capacity.

At the time of publication, we still have yet to hear an exact number when it comes to Park capacity, but that last confirmed number was 35%, which was released in early 2021.

How do you feel about the current crowd levels at Disney World? Let us know in the comments below.