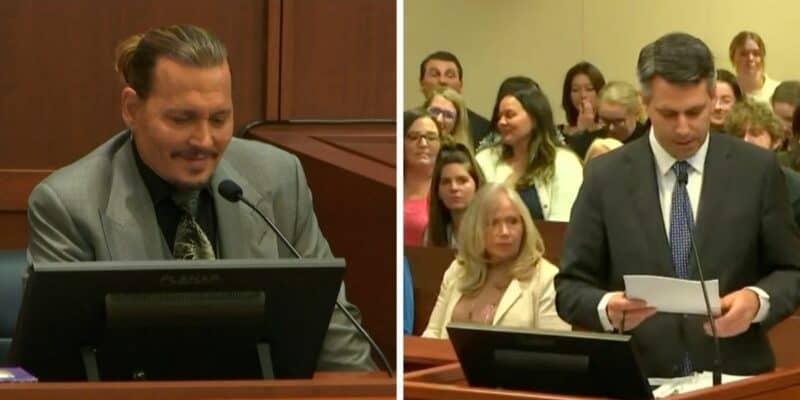 Over the last several days, Johnny Depp, 58, and Amber Heard, 35, have been in a courtroom in Fairfax, Virginia, as Depp is suing his ex-wife for defamation after she wrote an op-ed for The Washington Post, where she referred to herself as a “public figure representing domestic abuse.”

Related: Depp Admits In Court: “The Only Person I’ve Abused In My Life Is Myself’

Due to Heard’s allegations, Depp’s career has taken a few hits. Warner Bros.’ The Fantastic Beasts franchise dropped Depp and recast him with Madds Mikkelson. Disney also fired Depp from his iconic role of Jack Sparrow in the Pirates of the Caribbean franchise. Heard, however, is still set to appear in Aquaman and the Lost Kingdom (2023).

While Depp was on the stand, he showed many emotions as he addressed not only the abuse he faced when he was a child, but also the abuse allegations against his ex-wife, Amber Heard. Also during the Pirates of the Caribbean actor’s testimony, Ms. Heard’s lawyer, Ben Rottenborn, continuously objected, saying some of Depp’s statements called for hearsay, which Depp then started to have a bit of fun with.

Some of these moments were shared to social media as Depp fans are loving his “savagery”. At one point, Depp was explaining how one time, he went to a counselor to see if he had a drinking problem, where Mr. Rottenborn objected as it calls for hearsay, to which you can see Depp’s facial expressions showing confusion.

This was by far not the only time Mr. Rottenborn objected, and each time, Depp kept having fun with it. In fact, this back and forth banter between the Sweeney Todd actor and Heard’s lawyer, Mr. Rottenborn, continued during the cross-examination, which took place later in the week.

At another point, Mr. Rottenborn proceeded to ask Mr. Depp, “you were drinking pretty heavily?” to which Depp replied with, “were you there?”

In another instant, Depp was responding to a question Mr. Rottenborn asked, to which then Rottenborn interrupted and said “Mr. Depp, with respect, we’re trying to respect the courts time and the jury’s time, that was not my question.”

Depp, then interrupted Rottenborn and said, “I understand but when you take five minutes to look for a document,” as he smirked and stared directly at Rottenborn.

This banter continued throughout the cross-examination and into the redirect examination, when Depp was asked to list his other movie franchises. He immediately mentioned Alice in Wonderland, but then was unable to recall other projects, which is when he tried to make light of the situation saying he avoids watching his own films.

“I’m so pathetic when it comes to knowing what movies I’ve done,” Depp said on the stand as he smiled. “I’m sorry. I just, I don’t watch them. I feel better not watching them. What was the question again?”

This is when several attendees in the courtroom laughed loudly, which lead to Judge Azcarate to state very firmly, “Order in the court or I will have you removed. Understood? Thank you.”

Are you watching the Johnny Depp versus Amber Heard trial? What do you think so far? Let us know in the comments below.