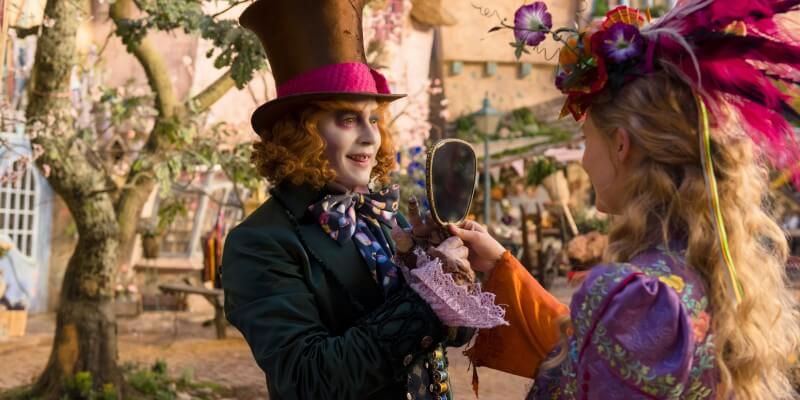 We at Inside The Magic are super-stoked for the next chapter in Disney’s Alice in Wonderland live-action film saga, and we were lucky enough to check out a special Q&A with star Johnny Depp and director James Bobin along with fellow fans via the movie’s official Facebook page. By the sound of it, Alice Through the Looking Glass is shaping up to be one heck of a ride!

Questions in the interview ranged from interesting to downright ridiculous — if he were any sandwich, he would be a bologna sandwich. Other answers were more complex, like the moments he lives for in movies.

“My favorite moment in any film is when the bottom drops out, when there’s confusion, when there’s the opportunity for chance, which is far more interesting than just reading your lines,” said Depp.

He also said that his favorite song is French: Le Mer by Charles Trenet. He also noted that he likes the English cover Bobby Darin did, called Beyond the Sea. One of the more interesting questions involved Depp recognizing how his dreams inform his character choices.

“I’ve had dreams about a majority of (my roles). I’ve (seen things) pop up in dreams that I’ve applied to the character,” Depp said.

For the full interview, check out the video below:

A modern adaptation of the classic children’s story Alice Through the Looking Glass written by Lewis Carroll, which continued on from the popular Alice in Wonderland story. This time Alice is played by the mother, who falls asleep while reading the the bedtime story to her daughter. Walking through the Looking Glass, Alice finds herself in Chessland, a magical and fun world. There she meets the Red and White Queens, as well as many other amusing friends on her journey across the chessboard countryside on to become a crowned queen.

The film is written by Linda Woolverton based on characters created by Lewis Carroll and produced by Joe Roth, Suzanne Todd and Jennifer Todd with Tim Burton and John G. Scotti serving as executive producer. Make sure to check it out when it hits theaters May 27th!

Comments Off on VIDEO: Johnny Depp talks Mad Hatter insanity in “Alice Through the Looking Glass”