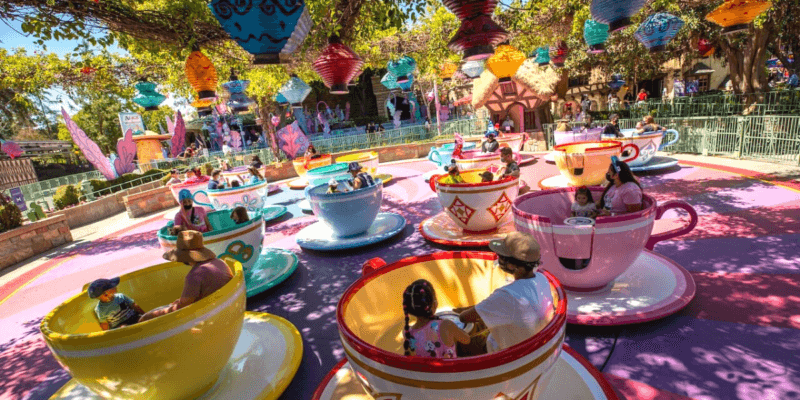 When it comes to seeing celebrities at Disney, it seems that many Guests get to see a Hollywood star almost every day if they are lucky! Of course, all of the singers and actors that many of us idolize are just like us, and love the magic of Disney. With Disneyland being located in California, many stars in Los Angeles tend to frequent both Disneyland Park and Disney California Adventure often.

We recently wrote about Justin and Hailey Bieber heading to Universal Studios Hollywood. Katy Perry has had a pizza party in Cinderella Castle. Ryan Gosling has protested the Haunted Mansion overlay in Disneyland. Justin Timberlake built lightsabers with his son last week. Paris Hilton has admitted to wearing prosthetics when she visits! And, those stories are just the tip of the iceberg when it comes to celebrities visiting Disney.

In the past, we have spotted Julianne Hough (Dancing With the Stars, Footloose, Safe Haven), Darren Criss (Glee, Muppets Haunted Mansion), and Kristen Chenoweth (Descendants, Annie, Wicked) filming outside Cinderella Castle in Magic Kingdom for the Disney Parks Magical Christmas Day Celebration. Reality star Paris Hilton also recently revealed in an interview that she wears prosthetics to “fit in” and not get attention when visiting Disneyland. This is something we have also seen Michael Jackson do in the past, when he would visit Disneyland in disguise.

Kim Kardashian, Khloe Kardashian, and Kourtney Kardashian, the Kardashian family are big fans of Disneyland, having celebrated many kids’ birthdays there in the past with Kanye West, and once, Kylie Jenner actually shut down the east coat Park, Magic Kingdom! We have also seen the reality star visit Disneyland with her family.

Most recently, it seems that Cardi B and her daughter went to Disneyland Park and enjoyed a swirling ride on Alice in Wonderland’s Mad Tea Party attraction. Memezar (@memezar) took to Instagram to post the two having a fantastic time together, and hilariously, someone else in their party was not having such a magical time.

Take a Twirl in a Teacup

Celebrate your unbirthday with a wild whirl through Wonderland. Madcap music fills the air as you rotate below a canopy of colorful lanterns.

It’s an exuberant swirl-a-bration—and you’re the Guest of honor!

Spinning Not Your Cup of Tea?

A wheel in the center of the teacup lets you control the direction and speed of your spin. If you decide you want a wild ride, simply turn the wheel fast and hold on. If you want a gentler ride, you may opt to not turn the wheel at all.

Please be aware that although you can control the spinning, your teacup automatically tosses and turns on the platform deck.

Are you a fan of Mad Tea Party? Let us know in the comments below!