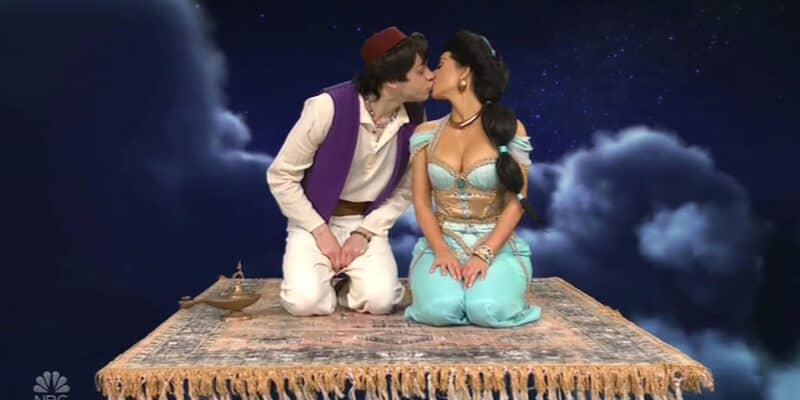 Saturday Night Live comedian Pete Davidson has been in the news a great deal lately thanks to his blossoming romance with superstar Kim Kardashian.

Rumors about Davidson and Kardashian began after the duo appeared in a Disney-themed SNL sketch in which portrayed Disney Princess Jasmine, while the comedian played Aladdin.

You can watch the full Aladdin-themed skit below:

Recently, social media drama abounded after Kim began following Davidson’s close friend and “Party in the USA” pop star, Miley Cyrus, on Instagram. After less than a month, Kim clicked unfollow, allegedly frustrated after the Hannah Montana actress serenaded Davidson with the song, “It Should Have Been Me” on New Year’s Eve.

Now, Davidson himself has rejoined social media after a four-year hiatus from all platforms. Cosmopolitan noted:

…it’s pretty big news that the SNL comedian has rejoined Instagram after a four year hiatus from the platform. It’s even bigger news that he’s marked his return by following just two people, and fans are a bit obsessed with who they are.

Back in 2018 Pete Davidson quit Instagram and all other social media, explaining that he just wasn’t enjoying using it any longer.

“The internet is an evil place and it doesn’t make me feel good.”

Related: Kardashians Throw Calories Out the Window at Disney Parks

As you can see [above], Davidson’s new account was quickly verified. He also amassed 1.4 million followers in a matter of hours without making a single post.

The SNL star is, however, following two accounts. One of the profiles, girlfriend Kim Kardashian’s official Instagram, makes perfect sense. The other, though, has left Marvel Cinematic Universe fans perplexed.

yall why is pete davidson following sebastian stan….omg is there going to be a project

boo radley is very confused by the entire situation:

Pete Davidson rejoined Instagram and only follows Sebastian Stan and Kim Kardashian and I just came here to say….I respect it.

Pete Davidson rejoined Instagram and only follows Sebastian Stan and Kim Kardashian and I just came here to say….I respect it. pic.twitter.com/uxwEApLmtl

So far, nobody involved in the situation has weighed in on why, exactly, Davidson is seemingly randomly following Stan.

As for fans of the entire Kardashian-Jenner clan, they can look forward to a brand new series, called simply The Kardashians, on Disney+ and Hulu.

A year after the popular reality series, Keeping Up with the Kardashians, finished its 20-season run on E!, Kris Jenner, Kim Kardashian, Khloe Kardashian, Kourtney Kardashian, Kylie Jenner, and Kendall Jenner confirmed they will be back starting April 14, 2022.

What are your thoughts on Pete Davidson following Sebastian Stan?