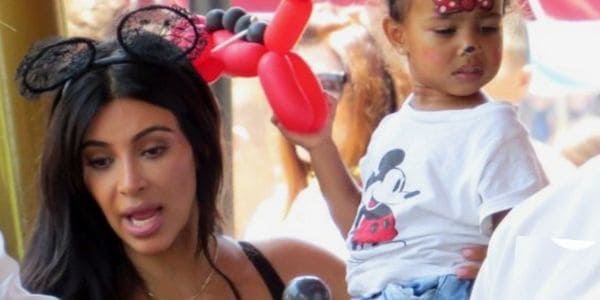 It’s no secret that celebrities love to go to Disneyland and Walt Disney World. Recently, we have seen people like Marvel’s Chris Evans (Captain America), Pirates of the Caribbean stars Javier Bardem and Penelope Cruz, Kylie Jenner, and Kourtney Kardashian just to name a few. And speaking of the Kardashians, Kim Kardashian recently posted a photo to Instagram that showed some of the younger kids in the family at Disneyland, or so we thought.

In a bizarre-looking Instagram pic, it appears that Kim Kardashian has seemingly posted a photo of her and Kanye West’s child, Chicago, and then photoshopped a pic of her sister Khloe Kardashian’s child True onto an older picture of Kylie Jenner’s child, Stormi. The picture shows the children at Disneyland, but users on social media were quick to point out how weird the actual photo looked.

A recent TikTok by mail (@maiachondrialmembrane) went in-depth into this weird situation and pointed out all of the proof that Kim Kardashian had actually posted an altered photo. Of course, we cannot be sure of what editing took place, but the video does leave it looking suspect.

if you’re wondering where i’ve been, ive been preparing content for the launch of my podcast @she/her/liar in the new year. follow for updates!!!

Related: The Kardashians Take Over Disneyland

We still aren’t sure why Kim Kardashian would do this but it could have something to do with Travis Scott’s return to Instagram as stated in the TikTok. His recent post marks the first time he’s posted on the platform since the deadly Astroworld Festival last year were unfortunately killed 10 people and injured over 300. The rapper left social media with a mournful message after the tragedy happened and has been in hiding ever since, until now.

As we said earlier, the Kardashians love to visit the Disney Parks with all their family. Kylie Jenner shut down “it’s a small world” when she visited last year as well as Kourtney Kardashian. With so many celebrities spotting at the Disney Parks, many wonder what kind of VIP treatment they get.

Disneyland is home to some truly iconic attractions like Space Mountain, Matterhorn Bobsleds, Mr. Toad’s Wild Ride and Splash Mountain. Splash Mountain was recently announced to be undergoing a massive retheme, turning it into a ride based on The Princess and the Frog (2009). This announcement has been met with excitement as well as controversy, as many Guests wish the ride would remain the same way it’s been since it first opened.

Splash Mountain isn’t the only Disney attraction being constructed as both Guardians of the Galaxy: Cosmic Rewind at EPCOT and Tron Lightcycle/Run at the Magic Kingdom are both being constructed too. These two rides will bring some exciting and thrilling experiences to the Parks that many Guests are super excited about.

What do you think about the picture Kim Kardashian posted? Do you think it looks fake? Let us know in the comments below!