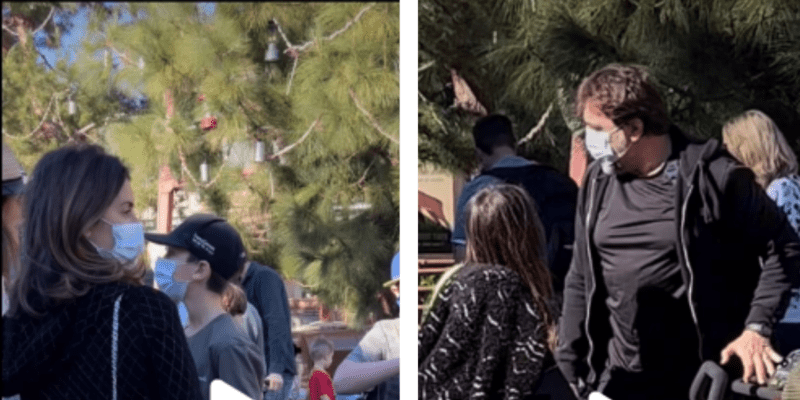 You never know what or who you might see when entering a Disney Park.

Whether at Disneyland Resort or Walt Disney World Resort, Guests from all over the world visit the Parks and sometimes that means you might run into a celebrity who is enjoying the magic with their family.

In the original video, users went crazy claiming to see the two stars and in this slowed down footage, you can see what looks to be Penelope Cruz and Javier Bardem.

Cruz made her debut as female pirate Anjelica following the exits of both Orlando Bloom (Will Turner) and Keira Knightley (Elizabeth Swann) in the Pirates of the Caribbean franchise. Geoffery Rush returned as Captain Hector Barbossa and Johnny Depp reprised his iconic role as Captain Jack Sparrow. Cruz currently has three projects in the works — The 355, On the Fringe, and Spanish-language film L’immensita.

Javier Bardem, who is married to Cruz, also starred in the franchise, making his appearance in Pirates of the Caribbean: Dead Men Tell No Tales (2017). He played the role of the undead Captain Salazar.

Related: ‘Jungle Cruise’ Takes Inspiration From ‘Pirates of the Caribbean’ to Find Success

The Pirates of the Caribbean franchise has been under fire as a whole after Disney decided to boot Johnny Depp  from his role as Captain Jack Sparrow. Johnny Depp and ex-wife Amber Heard have been entangled in a lawsuit for quite some time after Heard claimed Depp abused her. Depp has claimed that her allegations are false and untrue.

At the moment, there are two films that are seemingly being developed for the franchise. One would have an entirely new storyline with a female-led cast starring Margot Robbie. The second is Pirates of the Caribbean 6, which would theoretically be a continuation of the first five films that could potentially use a new actor as Jack Sparrow, written by Craig Mazin and Ted Elliott.

Do you think it was Cruz and Barden that this Disney Guest spotted?