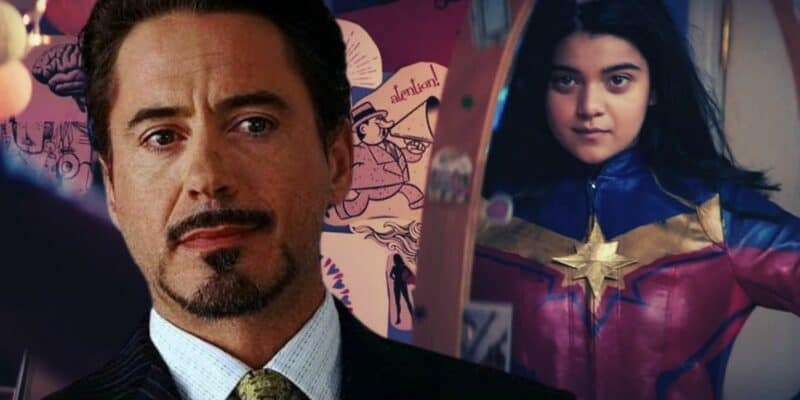 Marvel fans are still morning the loss of Tony Stark, the man who started the MCU with Iron Man (2008) and died helping to defeat Thanos (Josh Brolin) in Avengers: Infinity War (2018) and Avengers: Endgame (2019). Despite his death, Tony Stark’s presence — and the problems he caused — still loom over the Marvel Universe. Perhaps that’s why some believe Doctor Strange (Benedict Cumberbatch) actually murdered him to prevent any more problems.

No more so than in Spider: Far From Home (2019). Peter Parker/Spider-Man (Tom Holland) was struggling with how to fill the shoes that Tony Stark left behind. In that Marvel movie, Peter received the EDITH glasses from Nick Fury (Samuel L. Jackson). The sunglasses stood for a very Iron Man acronym for “Even Dead I’m The Hero.”

EDITH is an augmented reality security, defense, and artificial tactical intelligence system that gave Peter access to the Stark Industries’ global satellite network along with an arsenal of missiles and drones. Peter would eventually give EDITH to Quentin Beck/Mysterio (Jake Gyllenhaal). And thanks to new set leaks those drones developed by Tony Stark will be causing problems for another one of his Marvel Comics proteges – Kamala Khan.

Now leaks shared by Cosmic Media reveal that the EDITH drones are back, saying:

“Iman Vellani on set of the Disney+ #MsMarvel series during reshoots. The scene description: Kamala Khan is possibly being chased by drones, that looks similar to the one used by Mysterio.”

🚨 Iman Vellani on set of the Disney+ #MsMarvel series during reshoots.

The scene description: Kamala Khan is possibly being chased by drones, that looks similar to the one used by Mysterio. pic.twitter.com/5g8ZPBHyxr

While Ms. Marvel is clearly a big fan of Carol Danvers/Captain Marvel (Brie Larson), it looks like the Pakastani-America from Jersey City, New Jersey could be cleaning up Tony Stark and Peter Parker’s mess. William Ginter Riva (Peter Billingsley-Michaelsen) escaped with some of the technology at the end of Far From Home so fans have been expecting them to show up again soon.

Not much else is known about the plot of the Ms. Marvel series, which is expected to hit Disney+ this summer. Marvel fans have not been happy with some of what has been revealed. The hashtag #FixMsMarvel trended on Twitter when Kamala Khan’s polymorphic ability to change her size and shape was confirmed to have been changed to glowing constructs that make her more like Captain Marvel and Monica Rambeau (Teyonnah Parris from WandaVision).

This is a problem because a major part of Kamala Khan’s origin story by G. Willow Wilson as Ms. Marvel was her decision to never use her shapeshifting ability to mascarade as someone else, even her idol Carol Danvers/Captain Marvel. It was a defining moment in her story and fans have been mad that the MCU will be erasing this in her debut on the Ms. Marvel show.

Other problems include the whitewashing of some characters.  This includes casting Zenobia Shroff (The Big Sick) as Kamala Khan’s mother Muneeba Khan. Zenobia Shroff is a non-Muslim Indian actress. Also, Yasmeen Fletcher (Upside-Down Magic), a half-Caucasian Christian actress, has been cast as Kamala’s friend, Nakia Bahadir (a Turkish Muslim who wears a hijab). Yasmeen Fletcher addressed her role in the series on the red carpet of Spider-Man: No Way Home (2021).

Ms. Marvel will meet Captain Marvel for the first time in The Marvels (February 17, 2023). Iman Vellani will make her big-screen debut alongside Teyonnah Parris from WandaVision, who will be reprising her role as Monica Rambeau. The next Marvel Studios original series to hit Disney+ will be Moon Knight on March 30, 2022 and it will be followed by Doctor Strange in the Multiverse of Madness on May 6, 2022.

Let us know in the comments if you think the latest leak from Ms. Marvel means Mysterio is still alive.