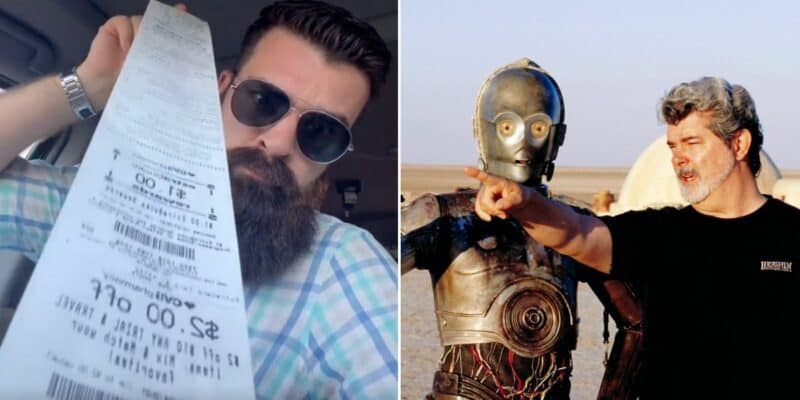 Even if you’ve never watched a single movie in the Skywalker Saga, you probably know the Star Wars theme song when you hear it. John Williams’s iconic score was first featured in Star Wars: Episode IV – A New Hope (1977) and has become as much of a pop-culture staple as legendary characters like Han Solo (Harrison Ford), Princess Leia Organa (Carrie Fisher), and Jedi Knight Luke Skywalker (Mark Hamill).

Now, the Star Wars theme has gone viral for a hilarious reason — a CVS shopper has used it as the background music to show off one of the store’s notoriously long receipts on social media platform, TikTok.

The video, which you can view below, features the caption:

Brian’s video has been viewed more than 2.5 million times.

Many commenters on the video said they thought the clip was funny, with many making their own jokes.

“This is actually hilarious,” one person wrote…”May the force be with the rainforest,” another person joked.

In a 2020 interview with The New Yorker, composer John Williams shared details about how he got the gig scoring Star Wars in the first place — and it involves another very popular film director with Lucasfilm connections:

“One day, Steven [Steven Spielberg] called me and said, ‘Do you know George Lucas?’ I said, ‘No, I have no idea who he is.’ ‘Well, he’s got this thing called Star Wars” and he wants to have… a classical score, and I’ve convinced George he should meet you.”

The New Yorker article goes on to detail one of Williams’s most memorable moments while recording the score for the very first Star Wars movie:

Williams’s most vivid memories of the first “Star Wars” score involve the recording sessions, with the London Symphony: “That fanfare at the beginning, I think it’s the last thing I wrote. It’s probably a little overwritten—I don’t know. The thirty-second notes in the trombones are hard to get, in that register of the trombone. And the high trumpet part! Maurice Murphy, the great trumpet player of the L.S.O.—that first day of recording was actually his first day with the orchestra, and the first thing he played was that high C. There was a kind of team roar when he hit it perfectly. He’s gone now, but I love that man.”

William’s incredibly famous score can be heard in all nine Skywalker Saga films, which are listed below:

What do you think about this hilarious Star Wars TikTok video?