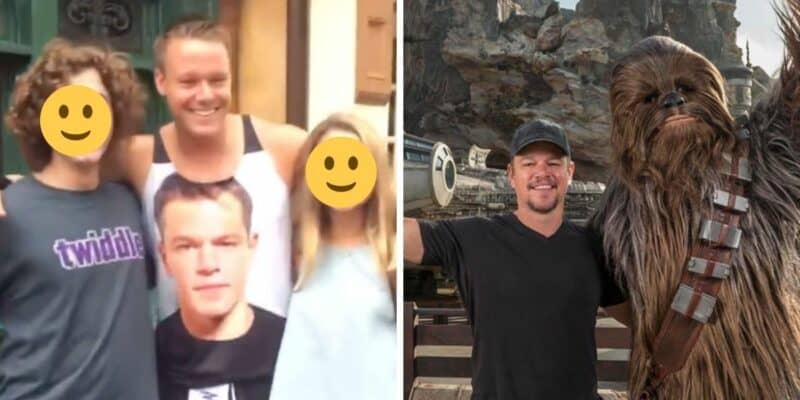 When visiting the Disney Parks, fans love running into or spotting celebrities. Recently, we have reported on Kylie Jenner, Kanye West, and Penelope Cruz and Javier Bardem at both Walt Disney World and Disneyland.

Well, just yesterday many fans took to social media to share that they ran into Matt Damon at EPCOT — except it was not Matt Damon.

Matt Damon, known for his roles in films such as Jason Bourne (2016), Good Will Hunting (1997), and The Martian (2015), is a Disney fan at heart as he’s been spotted inside Disney California Adventure at Disneyland Resort hanging out with Edna from The Incredibles (2004) in the past. Now, many believe they caught him inside World Showcase at EPCOT in Walt Disney World — except not everything is as it seems.

One man was walking around EPCOT recently wearing a Matt Damon shirt. He was seen posing for photos with families around World Showcase as many believed he was actually Matt Damon; however, if you look closely at his face — it is clear this is not Matt Damon.

One Disney World Guest caught part of the encounters on video, which they shared to Twitter saying:

Now, we have to admit there is a slight resemblance there; however, the real Matt Damon would more than likely never walk around World Showcase with a t-shirt of his own face on it, asking for attention to be drawn to him. And, if you look close enough, you can clearly tell that this is not the real Matt Damon.

With all of this being said, this clearly did not stop families from lining up and crowding him to take photos.

Twitter is loving the video as tons of replies have come in since the user posted yesterday. Katrina M. said:

Security to the Rose and Crown, we have a…Matt Damon impersonator?

Wearing a t shirt with the real one on it???

Hold on that security, I want to see how this plays out.

Security to the Rose and Crown, we have a…Matt Damon impersonator?

Wearing a t shirt with the real one on it???

Hold on that security, I want to see how this plays out.

Were you in EPCOT yesterday? Did you catch the Matt Damon impersonator? Let us know in the comments below.