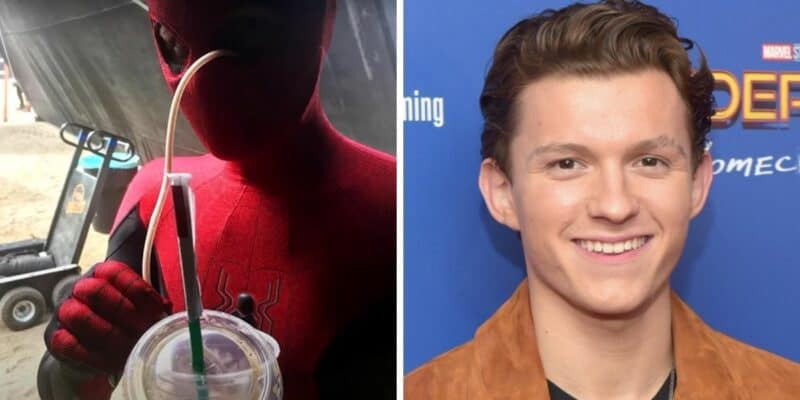 His upcoming starring role as the famous Marvel web-slinger is THE hot cinema ticket this festive season, with Spider-Man: No Way Home (2021) crashing cinema sites around the world last week when tickets dropped online.

Tom Holland’s third outing as the Marvel superhero has caused intense speculation the last few months over the plot and cast for Kevin Feige’s upcoming Marvel Cinematic Universe movie, with Marvel fans anxious to see if Tobey Maguire and Andrew Garfield will be making an appearance.

Now, Holland has revealed some surprising production secrets about filming No Way Home.

Every Marvel fan is ready to see the Sinister Six from Marvel Comics make their live-action Marvel Universe debut in No Way Home and take on Tom Holland’s web-slinging Avenger.

The official trailer for Jon Watts’ No Way Home broke the internet last month, with Kevin Feige warning of fan disappointment ahead of the movie’s major addition to the MCU timeline.

Holland is known for his “cursed” interviews and spoilers, with a recent video of him watching the No Way Home trailer seeing him almost spoil the movie in only two words.

In an interview with talk show host Graham Norton on the BBC, however, Tom Holland revealed some spoiler-free secrets about the filming of the new MCU movie.

Holland and his co-star, Zendaya, who started the press tour at the Ballon d’Or Festival in France last week, were joined by DC Comics’ Man of Steel (2013) and The Witcher actor Henry Cavill.

The Superman and Spider-Man actors in the same interview produced some amazing superhero chats, with both stars making quips and comparisons of their superhero suits.

Graham Norton asked Holland if the Spider-Man suit is the same in the upcoming No Way Home, to which Holland replied: “Yes, it’s the same, yeah, as the last one, there’s no changes.”

The No Way Home titular actor went on to berate Marvel Studios for not adding a zip into the costume, saying: “Again, I asked for a zip and I didn’t get one.” Holland then asked Cavill if he has a zip in his Superman costume and the star replied, “Yeah, sort of.”

This caused an amusing reaction from Holland, so Cavill added, “It’s not a conventional zip, no, otherwise you’d see it, but yeah.” Holland then asked, “We’re talking about the same zip, right? A toilet zip.” Cavill replied with a chuckle, “I hope so.”

During the BBC interview, Holland’s partner Zendaya also revealed that she has concerns about his Spider-Man suit.

“It’s one piece and there’s a helmet that goes underneath it. I always have this fear that if he’s like working really hard or something’s happening that if he had to throw up per se. How? How is he going to get it out?” This is a genuine concern. So honestly, sometimes when I look at it him, I get a little scared it just stresses me out.”

The adorable smiles from Tom Holland across to Zendaya as she spoke about her concerns about his wellbeing made Marvel fans go wild.

Norton then proceeded to ask Holland about the logistics of the Spider-Man suit, asking him “You can eat with the suit on?”. Tom Holland then reveals a rather disturbing photo, replying:

“Some things. Some things. Essentially the eyes pop out, and there used to be these fans. I remember them bragging about how they’d added these fans that you could click and it would supposedly cool me down. They worked once. After that, I’d have these hot batteries in my helmet. But there’s a hole underneath the eye socket where we used to be able to feed a tube down and I could drink without taking the suit off because it takes a lot of time.”

You can watch the Graham Norton clip below:

What did you think of the interview on Graham Norton? Are you excited to see the Spider-Man suit again?