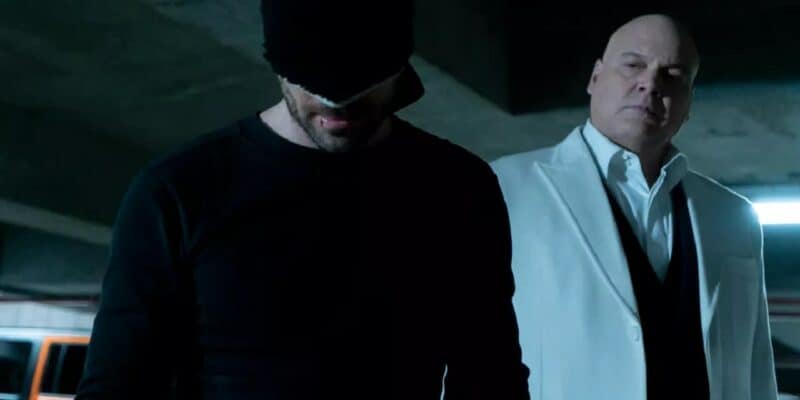 **Hawkeye Episode 4 and 5 Spoilers Below**

As expected, Wilson Fisk/Kingpin has finally brought Netflix’s Daredevil to the Marvel Cinematic Universe in Jeremy Renner and Hailee Steinfeld’s Hawkeye series, which is currently airing on Disney+. The villain appeared briefly on cell phone footage with Eleanor Bishop (Vera Farmiga), but it was certainly enough to confirm his role in the MCU moving forward.

Due to this, D’Onofrio’s appearance in Hawkeye is immensely exciting for Marvel fans, as it signals the future return of Cox and others. It is worth noting, though, that this “new” MCU Kingpin is:

…is different from Vincent D’Onofrio’s previous version of Kingpin. Wilson Fisk/Kingpin is a public figure in Netflix’s now-canceled Daredevil. He appears at press conferences, spouts off at the media, and manipulates the authorities into helping him secure power. But Hawkeye paints its mystery figure as working in the shadows and coming into power undetected. This crime boss hates the limelight. In Hawkeye episode 4, Clint Barton even says that the mystery villain doesn’t like a lot of attention.

Now, perhaps partially as a result of D’Onofrio’s return to the spotlight, a surprising film has climbed into the number one spot on Netflix.

Officially described as, “Released from prison into a society that won’t forgive her, a woman convicted of murder searches for the little sister she was forced to leave behind,” The Unforgivable (2021) stars D’Onofrio alongside Sandra Bullock, Viola Davis, and Jon Bernthal. Nora Fingscheidt directs the “gritty thriller”.

You can currently stream The Unforgivable on Netflix and Hawkeye on Disney+ anytime.

Are you looking forward to more Daredevil stars in Kevin Feige’s MCU?