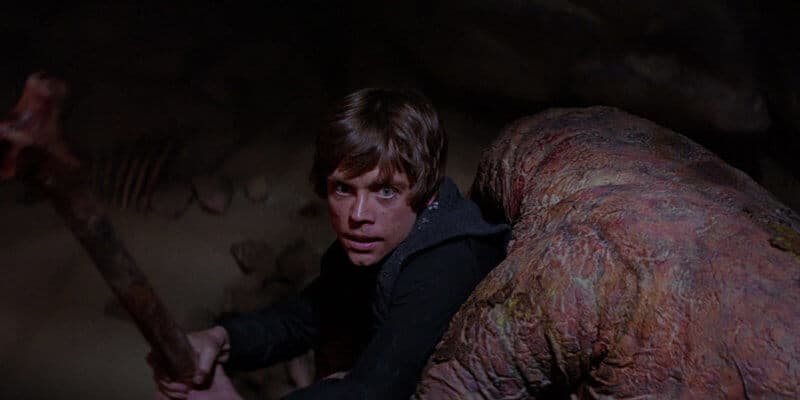 Star Wars fans who had spent money to back the Vintage Collection Razor Crest were livid at the time, with the 28,000 Mandalorian fans and toy collectors miffed after the pre-Imperial ship was destroyed by a single strike, with nothing left but Grogu’s silver ball and Djarin’s beskar spear.

Many of the people who funded the Razor Crest model took to social media to express their disappointment. As one article noted:

Hasbro often coordinates its toy plans with creative personnel from Star Wars shows and films during the developmental phases to ensure accuracy, which might lead some irate collectors to believe that the company already knew the ship’s fate as it was collecting major money from fans.

The towering hulk of muscle who greeted Luke Skywalker in the shadowy pit beneath Jabba the Hutt’s throne room is poised to make a comeback.

Although bested by the Jedi in Star Wars: Return of the Jedi, this morning Hasbro announced plans to bring the sharp-toothed beast into the 6-inch scale Star Wars: The Black Series line if the brand’s next HasLab crowd-funded campaign reaches its target for production.

Now, HasLab has shared details about tiered “rewards” that will be included with this new $349.99 set should the crowdfunding campaign be successful. If the project reaches 11,000 backers, purchasers will receive a Gamorrean Guard figure, described as:

A 6-inch-scale The Black Series Gamorrean Guard™ figure on a classic Kenner-inspired Power of the Force™ cardback with a special collectors coin to continue the tradition of celebrating the Kenner brand. This exclusive execution can only be found here, in this HasLab issue. Fans can recreate the iconic scene in Star Wars: Return of the Jedi™, when the Gamorrean Guard unwittingly becomes the Rancor’s “lunch”.

The newly revealed second-tier item requires 13,500 backers and includes both a set of bones — Tauntaun, Twi’lek, and human — and a backdrop taken straight from George Lucas’s final original trilogy film. This reward is described as:

With this unlock, you will expand the galaxy of scene recreation possibilities. Build your very own movie-inspired display with a variety of highly detailed bone accessory pieces inspired by the Rancor’s prey in Star Wars: The Return of the Jedi. This includes the exact type of bones Luke Skywalker used to bring the Rancor to its knees in defeat – a human skull and femur bone. We’ve also included a variety of skulls from different species – a Tauntaun™ skull, a Gamorrean Guard skull, a human skull, a male Twi’lek skull, and a female Twi’lek skull – as well as several ribcages. When you’re not using these for maximum scene recreation, they can be displayed in a base that resembles the desert soil of Tatooine. You will also receive a Star Wars: Return of the Jedi Rancor dungeon scene-inspired cardboard background that has all your favorite details from that iconic scene, like the Rancor pit door, the trap door, the grating in the ceiling, and even the door Luke attempts to escape through.

The final two reward tiers have yet to be revealed on the official Hasbro Pulse website. Currently, the Rancor scene has just over 5,000 backers. If you are interested in helping Hasbro put the Razor Crest fiasco behind them, you can support this new Star Wars The Black Series project until December 6, 2021.

Are you interested in adding the Return of the Jedi Rancor scene to your Star Wars model toy collection?