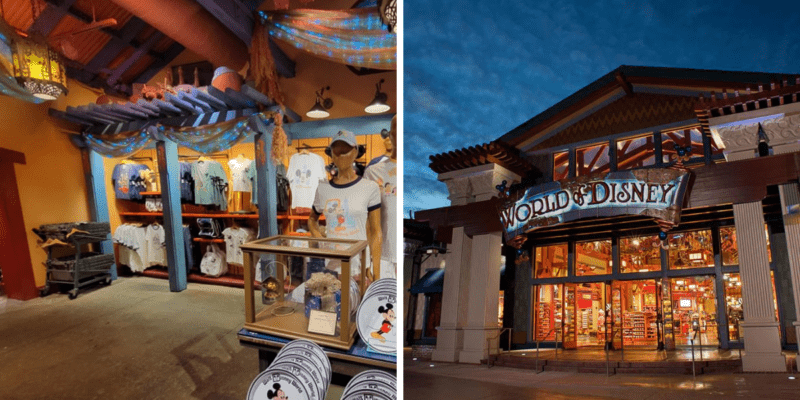 ‘Tis the season to be jolly – and buy Christmas gifts and sought-after toys for the holidays.

Merchandise in Disney Parks has always brought joy to children and adults alike, with Guests able to purchase exclusive items not found anywhere else.

Since October 1, Disney had released new collections in stores to celebrate Walt Disney World’s 50th anniversary, but it appears they are having serious supply chain issues across the Resort.

Inside the Magic was at Walt Disney World last week, and noticed a distinct difference in the offerings of Disney stores across the Parks.

The initial drops of new 50th items sold out in spectacular fashion, with a high demand of limited-edition items causing chaos and arguing amongst Guests inside the Emporium.

It appears, though, that Disney cannot keep up with demand like they usually can, with many shelves and areas empty.

Large areas of stores where they’d normally be shelving and merchandise were bare, with wider walkways and noticabley emptier shops.

At stores like Windtraders and Discovery Trading Company in Disney’s Animal Kingdom, Beverly Sunset Boutique in Disney’s Hollywood Studios, World of Disney at Disney Springs, and even the Emporium in Magic Kingdom, there were bare shelves and empty merchandise units.

Additionally, a lot of apparel and clothing items were only available in very small or large sizes, and were not restocked the whole week we were there.

The new collections for Walt Disney World’s 50th celebration were not sold in many stores, and we found it difficult to find any 5oth-related merchandise except at World of Disney.

According to a Cast Member from the Merchandise team:

“Factories in China that ship us Disney merchandise are still suffering from delays due to the pandemic. We haven’t seen some shipments for months and are unsure when we’ll next see particular items in stores.”

Back on October 1, the line for Emporium merchandise stretched all the way past the Main Street train station. Despite the virtual queue for limited-edition merchandise, anxious shoppers clashed inside over drink cups and tumblers, causing angry shouts, snatching cups, and broken shelves.

The supply chain issues could also explain why at Magic Kingdom, EPCOT, Disney’s Hollywood Studios, Disney’s Animal Kingdom, and Disney Springs, Halloween merchandise from apparel to pumpkins were being sold. And none of this out-of-date merchandise was discounted.

Disney CEO Bob Chapek shared some details in September regarding how the COVID Delta variant impacted Disney productions, with certain Disney+ shows delayed due to the pandemic supply chain issues.

The Redhead on Twitter noted that as of this week, stores in Disney’s Hollywood Studios are now closed due to these supply chain issues:

Why are all the stores on the left side of Sunset Boulevard closed? They were open like two weeks ago.

Why are all the stores on the left side of Sunset Boulevard closed? They were open like two weeks ago.

Also I haven’t seen anyone talking about this but like Disney World is out of a ton of things. I think they’ve been hit by the supply chain issue but most of the shops are closed and the ones that are open have the same 5 unpopular items, or they put curtains over the shelves

Also I haven't seen anyone talking about this but like Disney World is out of a ton of things. I think they've been hit by the supply chain issue but most of the shops are closed and the ones that are open have the same 5 unpopular items, or they put curtains over the shelves pic.twitter.com/e4ThIj5C2H

During the summer, Disney implemented a purchase limit of two items on inventory across the Resort, but that hasn’t stopped resellers from trying to cash in on demand.

Resellers are Guests who go to Disney Parks and purchase multiple amounts of items so that they can resell them at a higher value to others. Many use their Annual Pass discount to get a deal on their items, and then profit off of those savings, which is not allowed and stated on the Walt Disney World website as a breach in the Annual Pass contract.

It’s unclear when Beverly Sunset Boutique will reopen or when Walt Disney World will see their inventory levels go back to normal.

Stay tuned to Inside the Magic for future updates regarding Disney merchandise.

Have you noticed a change to Disney’s merchandise levels? Let us know in the comments.