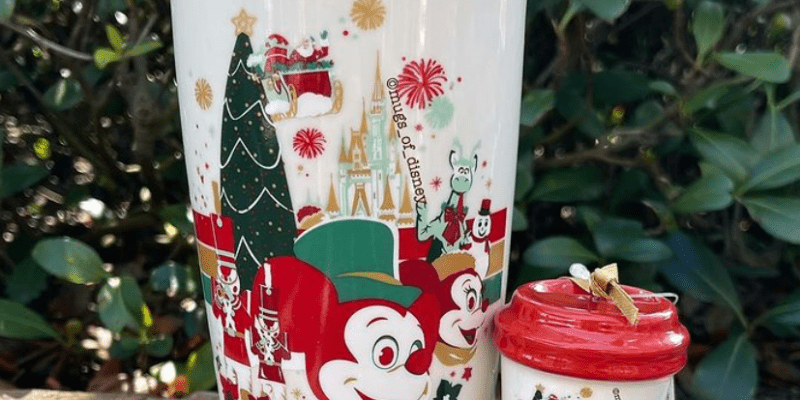 Disney and Starbucks go together like holiday movies and cocoa, or Santa and Rudolph.

And now, Disney Parks has just released a brand new Starbucks tumbler — just in time for the holiday season!

One of the most popular items Disney released for The World’s Most Magical Celebration was the 50th anniversary Starbucks tumbler. The new cup caused some altercations in Walt Disney World, and upon its release on shopDisney, the online retailer quickly sold out.

This new holiday set, pictured by Mugs of Disney, includes a beautiful vintage-style holiday design and can be found at the Main Street Bakery in Magic Kingdom, and at Disney Springs.

No, this isn’t just a Starbucks account even though it seems to be lately!😆 However, the Walt Disney World Starbucks Ceramic Tumbler and Ornament were released today in Magic Kingdom and Disney Springs, so I HAD TO share!🎄☺️ There is also a Disneyland version of these as well. Do you collect any of the Disney Starbucks Collection? If so, which items? Im so happy to see the Toy Soldiers on them! They are an easy family favorite every year!!

White with a red lid, the tumbler sells for $24.99, and features Cinderella Castle surrounded by a Christmas tree, Santa Claus, and reindeer. Mickey and Minnie Mouse also appear prominently in their winter attire.

The ornament sells for $14.99, and has a gold ribbon to hang the gorgeous decoration on your Christmas tree.

We can’t wait to get our hands on one of these new holiday designs!

When Starbucks was first announced as a partner for Disney Parks, some Guests weren’t sure about the partnership. However, the brand has done very well. This type of merchandise they offer really helps with the integration between Disney and Starbucks. Plus, we’ve always been a fan of the co-branding and the fact that Disney kept original locations (like the Main Street Bakery) largely intact when it changed to Starbucks.

Are you a fan of the new Starbucks holiday tumbler design? Let us know in the comments below!

Comments Off on NEW Starbucks Tumbler Arrives at Walt Disney World For the Holidays!