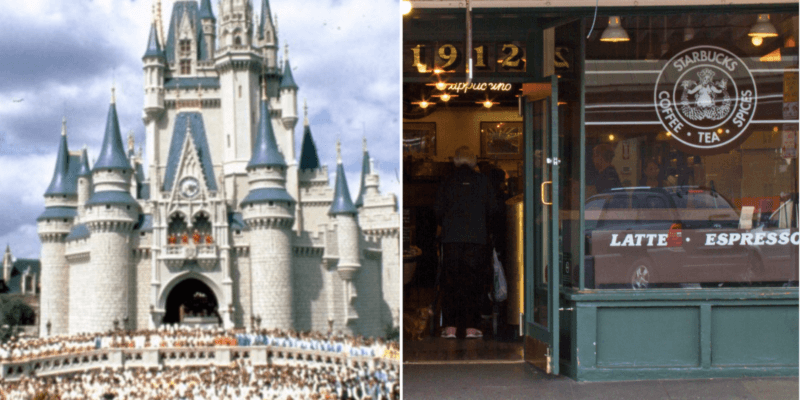 As Walt Disney World Resort approaches its 50th anniversary, Disney fans around the world are gearing-up to visit the Florida Resort’s four theme parks — Magic Kingdom, EPCOT, Disney’s Animal Kingdom, and Disney’s Hollywood Studios — for an EARisdescent celebration that will last for 18 months!

Interestingly enough, Disney World shares a special 1971 connection with another world-famous brand (that just happens to be ultra-popular with Disney lovers) — Starbucks Coffee!

As the Orlando Sentinel pointed out, the original Starbucks Pike Place location in Seattle was founded in 1971:

How it started: The coffee seller was established in Seattle in 1971, but didn’t expand outside of that city until 1987.

How it’s going: In 2019, it had more than 31,000 stores worldwide, including inside all four Walt Disney World theme parks plus two locations at Disney Springs.

As mentioned in the Sentinel‘s article, Disney World property is home to a grand total of six Starbucks locations. Only the Disney Springs Starbucks stores have the “Starbucks Coffee” name, though.

Related: What Would a Disney Character Order at Starbucks?

Most Disney Parks fans already know the story of Walt Disney World Resort. The Florida theme park was Walt Disney’s dream and, although the man behind the Mouse didn’t live to walk down Main Street, U.S.A., toward Cinderella Castle on opening day — October 1, 1971 — Walt’s dream still lives on today every time a Guest walks through the gates of the Magic Kingdom and enters a world of pure imagination.

Starbucks, too, began with a dream. The coffee company’s official About Us reads, in part:

Every day, we go to work hoping to do two things: share great coffee with our friends and help make the world a little better. It was true when the first Starbucks opened in 1971, and it’s just as true today.

Back then, the company was a single store in Seattle’s historic Pike Place Market. From just a narrow storefront, Starbucks offered some of the world’s finest fresh-roasted whole bean coffees. The name, inspired by Moby Dick, evoked the romance of the high seas and the seafaring tradition of the early coffee traders.

In 1981, Howard Schultz (Starbucks chairman and chief executive officer) had first walked into a Starbucks store. From his first cup of Sumatra, Howard was drawn into Starbucks and joined a year later.

Now, with a host of Starbucks “secret menu” Disney-inspired drinks, Disney Parks x Starbucks Christmas ornaments, and a massive, ever-changing collection of coffee tumblers and “Been There” series mugs, it seems that the connection between Starbucks and Disney was a match made in Magic Kingdom heaven, almost 50 years ago.

What do you think about the fact that Starbucks and Walt Disney World first opened the same year? Were the two companies destined to work together?

Comments Off on Disney and Starbucks Share a Crazy Connection