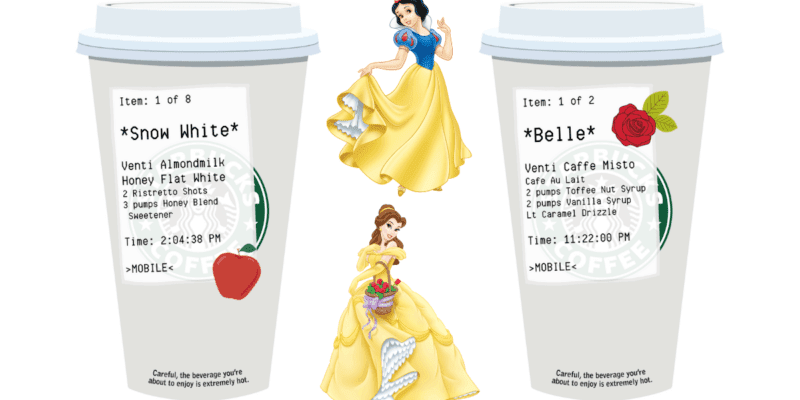 Do you ever notice that adults at Disney Parks are often just as hyped up to be there as the kids are? That’s because they’ve got a secret ingredient: coffee.

Even though Joffrey’s Coffee & Tea Co. is the official specialty coffee of the Disneyland Resort, Walt Disney World Resort, and Disney Vacation Club, Guests do still like to hit up the in-park Starbucks to get caffeinated for their Disney day. Everyone’s got their go-to drink order whether it be a caffeinated beverage or not, but have you ever wondered what a Disney Character would order at Starbucks?

With a coffee in hand and Disney love in his heart, Matt at @disneycoffeeblog shares some awesome stickers he has coming soon that we had to share with you! These stickers are drink orders that Disney Characters would enjoy in the iconic Starbucks cup.

Along with sharing these Disney Character drink stickers, we got the inside scoop from Matt as to what inspired these stickers and imaginative drink creations. Which one of these princesses ordered a drink that you would like to try?

What was the inspiration behind the Starbucks Order Disney Character Drink Stickers?

“I honestly just started to imagine what Disney Characters would order at Starbucks. Then I went to the Starbucks App to customize some drink combinations. They’re all actual drinks that anyone can order, and I’m definitely going to try that Raspberry White Mocha that I designed for Ariel.”

“I tried to design each order around a defining factor of each character so, a Pink Drink to match Aurora’s dress, Green Tea Matcha for Mulan, Double Chocolate for Anna, and of course, a Pumpkin Coffee for Cinderella. Each of the timestamps are actually the release dates of the movies, except for Walt’s. That one is his birthday.”

Which one would be your drink of choice?

“I’m typically just a plain black coffee kind of person, like Walt, as you can see on his cup. But I’d really like to try Belle’s drink, the Cafe au Lait with Toffee Nut and Vanilla Syrup. Starbucks calls their Cafe au Lait a Caffe Misto, and it’s a very popular coffee in France.”

Matt still has some more Disney Characters to design drink orders for, so we’ll be keeping an eye out for when these stickers are available in his Disney Coffee Blog shop! In the meantime, let’s head over to our local Starbucks to try out each of these drinks. I mean, how cute that Snow White’s drink order is item 1 of 8 because she’s Snow White and the Seven Dwarfs!

Share with us in the comments below what your go-to Starbucks order is and which Disney character you are most like, based on their coffee order!

Comments Off on What Would a Disney Character Order at Starbucks?