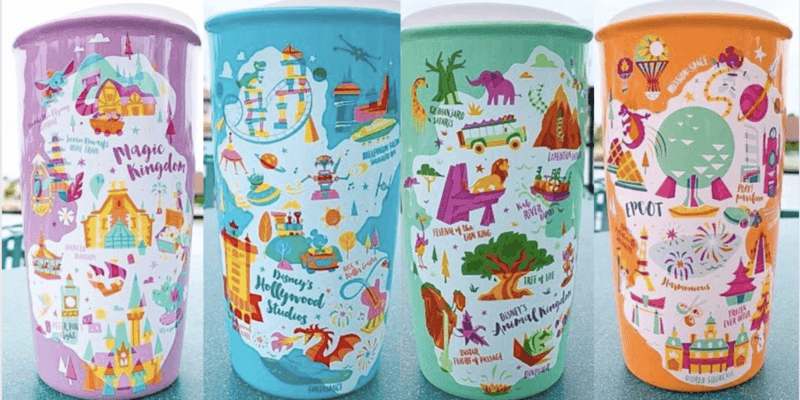 There is one mug for each of Disney World’s four theme parks — EPCOT, Magic Kingdom, Disney’s Animal Kingdom, and Disney’s Hollywood Studios. Below, we take a closer look at each style.

Like the Disneyland and Disney California Adventure travel tumblers, these ceramic cups feature Disney Parks icons on a stylized map.

The Disney’s Animal Kingdom mug is green, presumably to pay homage to nature — just like the theme park does! The Tree of Life anchors the map on this Starbucks tumbler, with Avatar Flight of Passage, Kilimanjaro Safaris, Expedition Everest, Kali River Rapids, and Dinosaur also featured.

The mug also features one of the lotus flowers from the now-defunct Rivers of Light nighttime spectacular at the very bottom of the mug.

The EPCOT mug is an eye-catching orange color with — what else? — Spaceship Earth featured front and center!

Other EPCOT icons on this travel mug include the upcoming HarmonioUS fireworks show, various buildings from the World Showcase, and the currently in-progress Play! Pavilion and Remy’s Ratatouille Adventure ride.

That’s a LOT of Disney magic in one travel tumbler!

For another look at these adorable new additions to the Starbucks x Disney Parks collection, check out this Instagram post by disneys.neverland.delivery:

We can’t wait to snag all four of these mugs for our own Disney Starbucks collections! Which are you looking for first?