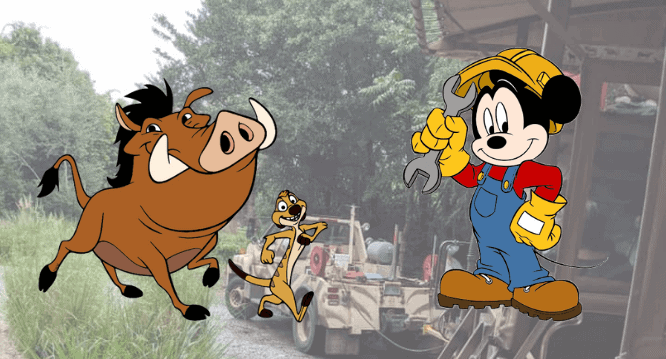 Earlier today, Kilimanjaro Safaris at Disney’s Animal Kingdom experienced a delay. While delays on attractions aren’t anything new, due to live animals with their own ideas (see Rhino-middle-of-the-road-fights), we got wind of what may have really caused the delay. A truck containing Disney World Guests broke down in the middle of its experience and required assistance from a Kilimanjaro Safaris Tow Truck back to the loading and unloading zone.

Tow Truck on the Scene at Kilimanjaro Safaris

WDW Stats on Twitter marked the beginning of the closure around 12:40 pm in the afternoon and then clocked the resumption of attraction services a short 45 minutes later. We love WDW Stats for insights on rides or shows that we may be headed to while having fun in the Disney Parks. See their tweet below, which reads, “Kilimanjaro Safaris has been temporarily interrupted. On average, an interruption takes 14 minutes.”

Kilimanjaro Safaris has been reopened after an interruption of 25 minutes. https://t.co/T9TWIN5Xso #AnimalKingdom #WDW #WaltDisneyWorld #DisneyWorld

On Facebook, social media user (and fellow Disney fan) Sharon W. posted a photo from her friend Teri Barker, who is visiting Walt Disney World right now. Teri’s vantage point on the ride vehicle showed the attraction rows in front of her, but also tow truck in front of the vehicle, gently towing them back to the loading area.

There was no mention of why the Safari truck broke down, but Sharon mentioned that it was Teri’s very first time experiencing this Animal Kingdom attraction! Thanks for sharing your adventure! Other commenters on the thread loved that even the tow truck on the scene was themed to match the safari vehicle and blended in so nicely with the park terrain.

More Tow Trucks at the Safaris

This is not the first time some of the Kilimanjaro Safaris jeeps have had issues. As many times as they make the circuit through the African Savannah each day, there are bound to be a few issues, even for the most tuned-up truck! In 2018, a similar fate befell another safari jeep, but a Disney Guest from another vehicle took the photo (Reddit). If you look closely to the right, you can even see the “lead” ATV making sure the ride path is clear for both the tow vehicle and the ride vehicle.

A truck broke down this morning in the middle of Kilimanjaro Safari. They towed it the rest of the way. from WaltDisneyWorld

If you are dreaming of a Disney World vacation yet to come, call up the safari professionals at Academy Travel at 609-978-0740. They are the ones to turn your magical at-home-safari recreation into the real thing! The Safaris are one of our favorite Outdoor Activities at Disney’s Animal Kingdom, and you’re sure to have a unique experience every time you ride!

Have you ever seen these magically painted tow trucks at Kilimanjaro Safaris? Leave us a comment below!