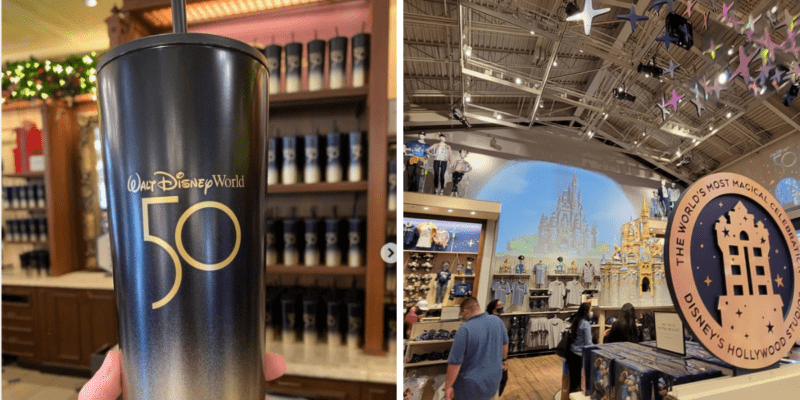 Walt Disney World’s 50th anniversary celebration is here – and with it a whole array of new merchandise and collections in Parks and online.

Now, Disney has dropped another 50th anniversary merchandise collection, but it comes with an expensive price tag.

The initial drops of new 50th items sold out in spectacular fashion, with a high demand of limited-edition items causing chaos and arguing amongst Guests inside the Emporium.

The item in highest demand seemed to be a limited release Starbucks tumbler, which featured a commemorative design and straw.

Dorky Parks Dad shared images of the new merchandise to his Instagram, including a new tumbler from Starbucks featuring the “Luxe Logo” design selling for $49.99.

In addition to all of the 50th merchandise that was released at the beginning of the celebration, including the EARidescent collection and WDW Vault Collection, Disney is now selling a new Kate Spade set of “Luxe Logo” bags and wallets.

And if Guests really want to celebrate the 50th anniversary of Walt Disney World in style, there is a “Luxe Logo” jeweled Mickey ear hat selling for $1000.

That’s right, you can purchase a limited-edition golden sparkly ear hat for $1000, complete with a black dust bag and decorative 50th commemorative box.

We’ll have to see how this merchandise sells this week in the Parks and online and hope for no more altercations over high-demand items.

What do you think of this new merchandise? Let us know!