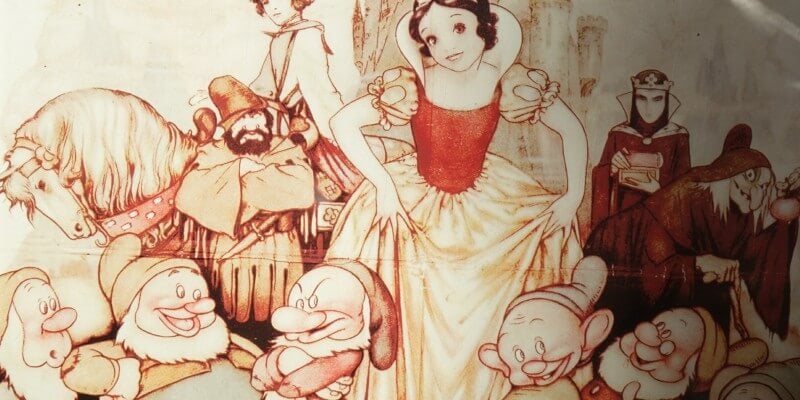 Every store has a story–when you’re at Walt Disney World, that is. Even the most humble of establishments has some sort of backstory to it, though sometimes the details are sparse and the narrative elusive. In other cases, the storyline evolved for the merchandise location is so elaborate, it bears sitting up and taking notice, and we’ll examine several of these.

We begin at the Carthay Circle, near the end of Sunset Boulevard in Disney’s Hollywood Studios (DHS). If you’re an avid reader of Disney history, you may recognize the name right off the bat. The Carthay Circle Theater was the location of the world premiere of Snow White and the Seven Dwarfs in 1937. It’s been closed for decades now, but its memory as an icon during the Golden years of Hollywood lives on. The store in DHS opened in 1994 with the Sunset Blvd expansion, and carries the subtitle “Once Upon a Time” on the marquee. The Snow White connection drives the story of this store. The outside of the building recreates the defining architectural features of the famous original, albeit in smaller scale, and just by its appearance pays homage to Walt’s first feature animated film.

Peek at the display windows around the outside and you’ll find some pretty clear references to the movie, from mining scenes to the distinctive dwarf cottage. Just inside the store you’ll see a large circular foyer, a tribute to the original theater’s circular layout, though of course in a much smaller scale. Mostly the store looks like other Disney stores: populated with men and women’s apparel sporting Disney logos, with minor thematic touches on such trivialities as lamps and display cabinets to make the overall appearance fit with the general look/feel of the 1930s setting–these are the sorts of tiny details that make Disney famous. They aren’t enough to call attention to themselves on their own, but they work in harmony to complete the illusion and make the area feel immersive. Beyond those background details, though, are a few more significant references to Snow White and the Seven Dwarfs. Hidden within the top sections of several display cases along the walls are old movie poster reproductions from the premiere night, making the connection more strongly to this one evening in the theater’s history. Stroll around the store a bit, and you’ll discover even more direct references to that night in 1937, in the form of framed photographs on a few of the walls, especially near the checkout counter. And if you happen to stick around in the store long enough, you’ll be treated to an Easter egg, unusual in its specificity even by Disney standards: snippets of the actual radio broadcast from 1937 that covered the red carpet event and arrival of Walt Disney, played overhead on the speakers in the store. The overall effect of these cumulative references is not just place-making (immersion to a new place), but time-making as well. To feel transported in time as well as place is harder to do, and though other Disney locations try to do it, few do it as well as this store.

Comments Off on Inside the story: Behind the theme of the Carthay Circle shop at Disney’s Hollywood Studios