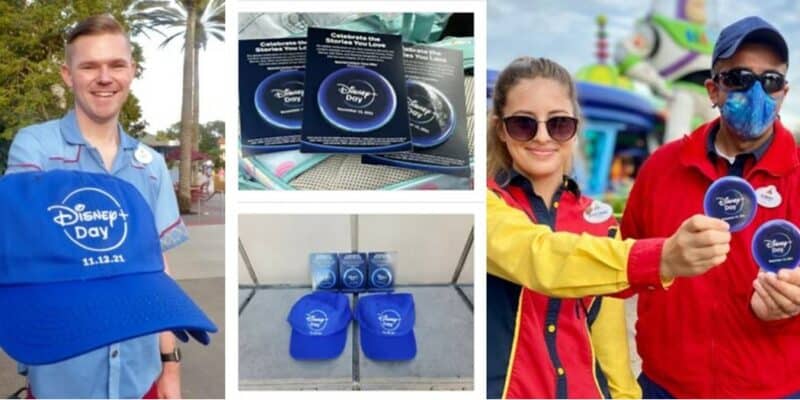 Disney+ Day was a fantastic day to be a Disney+ subscriber! Disney+ subscribers with a ticket and Park pass to the Disney Parks enjoyed early access to the Parks and even the Disney Park icons shined brightly with blue as Disney rolled out the blue carpet. One exciting perk was when Guests entered they received complimentary Disney+ Day merchandise. Well, it looks like the resellers are at it again as this once free merch is being sold online by resellers.

As Disney+ celebrated its 2nd Anniversary on November 12, 2021 (Disney+ Day), the streaming giant released exclusives such as new shorts, Ciao Alberto, The Simpsons in Plusaversary, and Olaf Presents, along with the new Disney+ film, Home Sweet Home Alone. News of upcoming films was also released such as the first photo of the Sanderson Sisters in Hocus Pocus 2 and the debut time frame for the live-action Pinocchio.

Anything free is always great, right? Well, that is especially true if you are a reseller and trying to make some money off of the freebie merchandise. Now that Disney+ Day has come and gone, those free hats and pins are now lining up on reseller hot spots such as eBay.

Disney fans have been especially annoyed lately with resellers as they seem to be arriving in droves. We aren’t sure if it’s because Walt Disney World Resort 50th Anniversary merchandise is so hot, or what the case might be, but buying up Disney merchandise and then turning it around and selling it for double what Disney was selling it for has seemingly become the new normal. While we believe Disney is trying to put a stop to the reselling conundrum by limiting most merchandise to 2 items per Guest, fans are still asking to crack down on resellers. There seems to be no stopping resellers, however, especially with freebie merch like these Disney+ Day items.

Are those resell prices for the Disney+ Day hat and pin worth it to you?