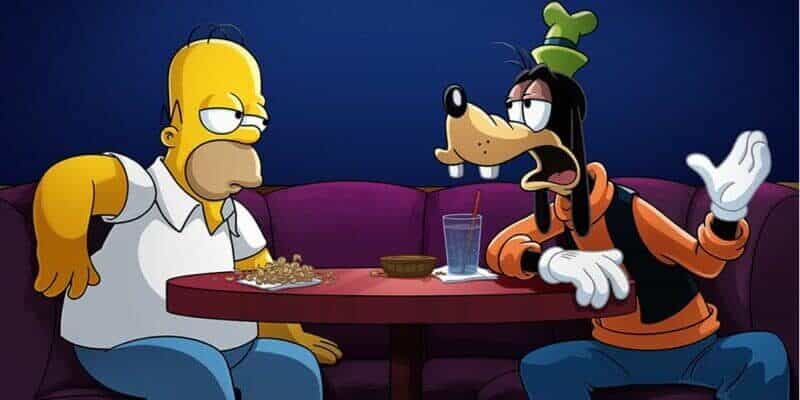 Disney+ recently celebrated its 2nd anniversary! The streaming giant held “Disney+ Day” on Friday, November 12th with new content releases such as the original film Home Sweet Home Alone and the new shorts, Ciao Alberto and Olaf Presents. News also broke about upcoming films like the live-action Pinocchio debut time-frame and the first photo of the Sanderson Sisters was revealed for Hocus Pocus 2. Plus, Disney+ took to the Disney Parks for the celebration by having Park icons glow with blue and even blew up inflatables in Paris near the Eiffel Tower! It was a big day. But there was one moment that had us scratching our heads. A drunk Goofy?

When The Simpsons, created by Matt Groening, landed on Disney+ we must say we were surprised but happy about the edition. New shorts landed and the series seemingly is a success for Disney+. So, it’s not a complete surprise that Disney+ decided to do a new short called The Simpsons in Plusaversary for Disney+ Day.

The plot of the short is that The Simpsons and Disney characters come together to celebrate Disney+’s second anniversary. The celebration is being held at Moe’s Tavern. The moment the 5-minute short begins, you’ll see a huge mix of Disney and Simpsons characters. From Elsa to Maleficent, Donald Duck, Buzz Lightyear, and more… so many Disney, Marvel, Pixar, and Star Wars characters have gathered for the party.

At the very beginning, you see Homer Simpson attempting to enter Moe’s Tavern but Maelificent informs him that he is not on the list. Goofy approaches and Homer become his plus one. The two sit together in a booth and the drinking of Duff Beer begins. While having a beer, Goofy cries to Homer, “Somedays you just don’t feel like being goofy, you know?” Homer’s response is “I don’t know if you’re a cow or a dog, but you’re definitely a downer.”

The table is filled with beer bottles and the slur of words is just extremely weird to see for any Disney/Goofy fan! You’ll also spot a Stormtrooper drinking, along with Gaston which doesn’t seem fully out of the ordinary for these villainous characters. But, Goofy?!

Lisa Simpson enters Moe’s to collect her father, Homer but ends up attempting to cheer up the tavern with a Disney song all about Disney+’s second anniversary which is rather comical. For example, did you know Disney+ will be coming to Jupiter in 2025? And when Disney+ stockholders are mentioned in the song, of course, you see Mr. Burns smiling away.

Bart enters as Mickey Mouse and the party comes to an end when he tells everyone to get back to work. Homer and Goofy stumble out of Moe’s with arms around each other. As Mickey (Bart) calls to Goofy, Goofy tells Homer he wishes he was his sidekick. Barney comes and takes Homer away and the scene ends with Homer reaching out and yelling, “Goofy!”

The short is well… super short of course. But in those couple of minutes, a lot unfolds for those of us that prefer to see Disney characters in a more magical light. Instead, we see Goofy drunk and complaining about being Goofy.

We will say we are thankful The Simpsons in Plusaversary is not on the Disney+ children’s profile. The only piece of The Simpsons currently available in the children’s programming is the 2020 short, Maggie Simpson in Playdate with Destiny. We made sure the little ones were out of the room before we watched the short so they didn’t have to see Goofy drunk.

Of course, overall… it’s The Simpsons. Would we expect anything less? Probably not. But, we personally felt like seeing Goofy in a drunken state was too much for our Disney magic eyes!

Did Disney take it too far with drunk Goofy? Let us know your thoughts in the comments.

Comments Off on Drunk Goofy? This Disney+ Short Was Too Weird to Watch