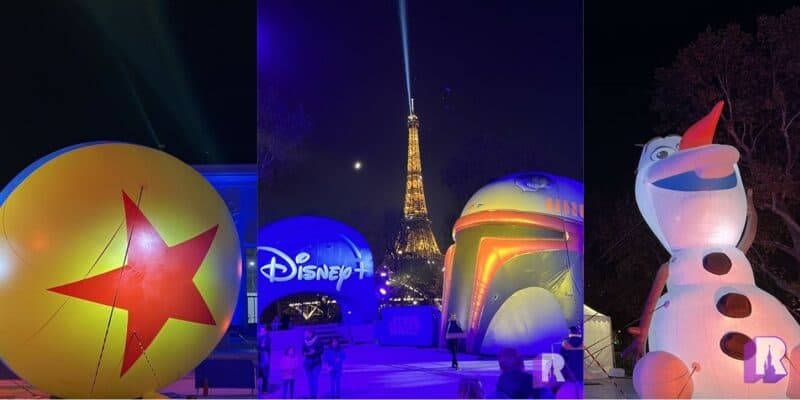 The big day is fast approaching… Disney+ Day that is! Disney+ is preparing to celebrate its 2nd anniversary with a celebration of streaming kicking off on Friday, November 12 (AKA “Disney+ Day”). Disney Parks are rolling out the blue carpet for the big event. For example, Walt Disney World and Disneyland Resorts are preparing to offer Disney+ character appearances. Disney+ subscribers will even have a chance to enjoy early access to the Parks. But, we must say, Disneyland Paris is REALLY going all out!

At Disneyland Paris’ Walt Disney Studios Park Guests can spot character appearances, enjoy special food, and more… but should also expect to stick around in the Park for an extra 30 minutes with a grand finale illuminating the Tower of Terror in blue. Not too far from Disneyland Paris however, Disney is celebrating near the iconic Eiffel Tower in Central Paris!

DLP Report tweeted, “Tonight we’re in Central Paris to celebrate #DisneyPlusDay a little early! We are Guests of
@DisneyPlusFR for this media event.” Check out their stunning image!

RLP Report continues with close-ups of some of the Disney inflatables noting, “Giant inflatable icons representing the Disney+ franchises have been installed just across from the Eiffel Tower for the #DisneyPlusDay event!”

What does Olaf, a Captain American shield, the Boba Fett helmet, and the massive Pixar ball from Toy Story have in common? Disney+, of course! Olaf is getting his own Disney+ series recapping Disney classics on Disney+ Day. The Falcon and The Winter Soldier series recently ended and thrilled Disney+ subscribers which is likely the reason for the Captain American shield. It could also be for the incoming “Rogers: The Musical” planned for the Hawkeye series. The Boba Fett helmet likely points at The Book of Boba Fett coming to Disney+ in late December, and the celebration of the success of The Mandalorian. And the Pixar ball is symbolic of the MANY Pixar and Disney films and series available on Disney+.

The Disney+ streaming giant is celebrating, and what better way to celebrate than with HUGE iconic inflatables!

What are you most excited to stream on Disney+ Day? Let us know in the comments.