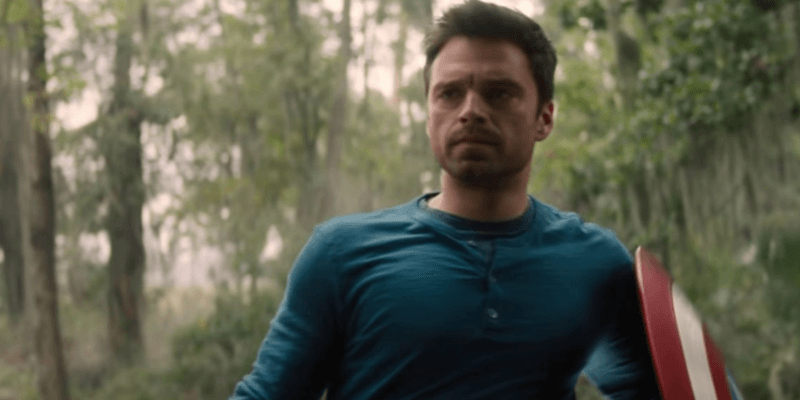 In a new interview, the creator of The Falcon and The Winter Soldier said that Bucky Barnes (Sebastian Stan) is no longer The Winter Soldier. We know that Sam Wilson (Anthony Mackie) has officially replaced Steve Rogers (Chris Evans) as Captain America. But, what’s next for the Bucky Barnes in the Marvel Cinematic Universe?

The Falcon and The Winter Soldier finale was the end of a chapter for Bucky Barnes (Sebastian Stan), according to series creator and head writer Malcolm Spellman.  The Falcon and Winter Soldier finale delivered provided the evolution of Sam Wilson (Anthony Mackie) that Marvel fans wanted, as he went from a famous Avenger struggling to find his place in a post-Snap world, to fully embracing the responsibility, the mantle, and the shield of Captain America.

A title card at the end of the finale episode, “One World, One People” gave audiences goosebumps as it officially changed the name of the series to Captain America and The Winter Soldier. While finally seeing Sam Wilson step into his role of Cap was exhilarating, fans were still left wondering why Marvel Studios did not also acknowledge the journey of Bucky Barnes on that title card as well.

The final episode featured Bucky completing his list of people he owed amends to for his atrocities committed while stuck in his persona as the brainwashed super soldier, the Winter Soldier. This seemed to signal to audiences that Bucky was finally able to get clear of the Winter Soldier trauma and move on. The title card’s acknowledgment of one character’s transformation and not the other’s left many Marvel fans curious if Winter Soldier was still in there somewhere, ready to comply.

Series creator Malcolm Spellman has now confirmed that is not the case. Speaking to ComicBook.com, Spellman said he no longer considers Bucky Barnes to be the Winter Soldier. He recognizes that Bucky Barnes began the series unwilling to admit that he could ever get past his Winter Soldier trauma, but found a way to heal over the course of the series six episodes:

“I think he has slayed that dragon, personally, and I don’t think I’ll be in trouble for that. So when Bucky enters the series, he’s never ever shaken what he believes, which is, ‘I remember everyone, murders, which means that part of me was there, which means a part of the Winter Soldier is me.’ And if even a fraction of Winter Soldier is you, you are an awful person. You know what I’m saying?”

At the start of the Falcon and Winter Soldier pilot, Bucky is a man trying to make up for a hideous decades-long past that was beyond his control, while also coping with being a man unstuck in time. His atrocities were committed at the direction of HYRDA, and while Bucky was not in command of his own actions, he remembers each horrible deed, and carries that burden with him. Spellman explained that finding a way to redeem Bucky was the main thrust of his character’s arc, stating,

So, Bucky Barnes is no longer the Winter Soldier in the Marvel Cinematic Universe, but Sebastian Stan is still ready continue exploring the character of Bucky Barnes alongside Anthony Mackie’s Captain America. What’s next for Bucky? Many fans believe he should return to the name he was given in Wakanda, when he first came to see the possibility of moving beyond his Winter Soldier past — White Wolf.

Speaking to THR, Spellman previously said that renaming Bucky the White Wolf in the finale’s title card was considered, but ultimately shot down, believing it to be too much for the audience to process. The idea of Sam Wilson replacing Steve Rogers (Chris Evans) as the icon of the Marvel Cinematic Universe, Captain America, felt like it needed its own room to breathe. Spellman explained:

“I got to see that moniker [White Wolf] in watching one of the cuts, and man, it really affected me emotionally. I believe they wanted the impact of Captain America and the Winter Soldier to land. And I do think that had they done Captain America and the White Wolf, it might not have been as emotional of a landing because it’s too much math and too much evolution. But I don’t know for sure what it was. I got blindsided by that while watching the cut — but I loved it.”

What do you think lies ahead for White Wolf in the MCU?

Comments Off on The Winter Soldier is No More (What’s Next?)