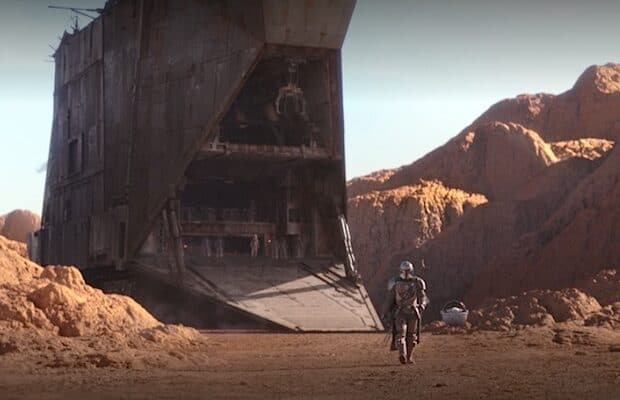 As the holiday season approaches, you can expect to see your local UPS delivery driver more often than usual — yes, even with all of the supply chain issues you’ve been hearing about — as gifts get delivered to your doorstep over the next couple of months.

And, if you happen to live in the New York City metro area, you’re in for a special treat right now — UPS has redesigned certain trucks to look like Jawa Sandcrawler vehicles from the Star Wars universe!

The United Parcel Service has shared details about their Bring Home the Bounty trucks on social media:

We’re traveling in Tatooine style with our new Sandcrawler inspired look. Check out the crew getting ready for this special galactic launch. #BringHomeTheBounty #StarWars

We’re traveling in Tatooine style with our new Sandcrawler inspired look. Check out the crew getting ready for this special galactic launch. #BringHomeTheBounty #StarWars pic.twitter.com/3gFHgAmJ7Y

UPS trucks wrapped to look like sandcrawlers YES. Ship me all the things!! #StarWars

UPS trucks wrapped to look like sandcrawlers YES. Ship me all the things!! #StarWars pic.twitter.com/0oJaMoGQBv

“With the Lucasfilm 50th anniversary coming to a close this year, we wanted to find a way to celebrate all of our beloved characters and stories from the classic to the new and everything in-between. There will be something to excite every Star Wars fan this year with such a wide assortment of items to enjoy and engage with, whether fans are adding to their own collections or scouring for the perfect gift.”

More on Sandcrawlers In the Star Wars Franchise

The vehicles have also appeared in Jon Favreau and Dave Filoni’s hit series, The Mandalorian, first in Season 1 and again as bounty hunter Din Djarin (Pedro Pascal), Mos Pelgo Marshal Cobb Vanth (Timothy Olyphant), and Grogu (AKA “Baby Yoda”) teamed up with “sand people” — a colloquial term for the scavenger Jawa species — in the Season 2 premiere (“Episode 9: The Marshal”).

Sandcrawlers are huge treaded fortresses used by Jawas as transportation and shelter. The sand-pitted vehicles, many meters in height, are equipped with a magnetic suction tube for sucking droids and scrap into their cargo chambers.

The Databank also goes on to detail what is arguably the most pivotal scene in Star Wars history to feature the tanks:

During the Galactic Civil War, the droids C-3PO and R2-D2 were found by a Jawa sandcrawler and sold to Owen Lars and his nephew Luke Skywalker. What seemed like a nice payday for the Jawas turned out to be their doom – Imperial troops tracked the sandcrawler and destroyed it.

Are you hoping to see a Sandcrawler UPS truck in person this Christmas season?