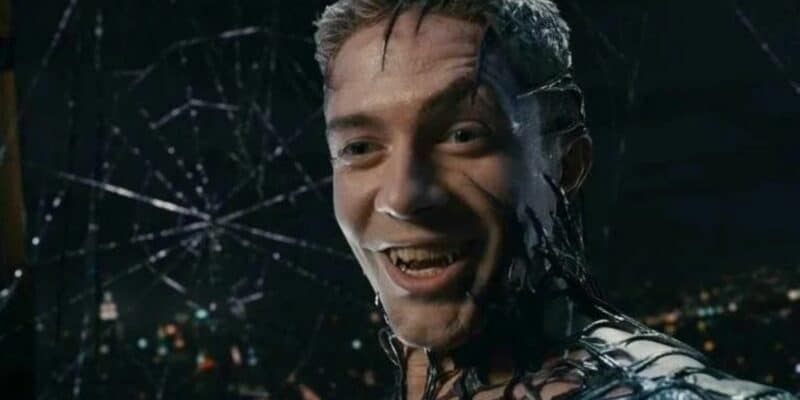 Spider-Man 3 star Topher Grace teased that his Venom, Batman, and Wall-E are appearing in Spider-Man: No Way Home.

Every Marvel fan is waiting for Spider-Man: No Way Home (2021) to hit theaters this December, and rumors on the previous Spider-Man stars appearing in the film are ramping up. While Andrew Garfield outright denies any involvement in the Marvel movie, Spider-Man 3 (2007) star Topher Grace flat out jokes that he’s in No Way Home.

Sam Raimi’s Spider-Man trilogy is one of the most revered superhero franchises in history, and Alfred Molina’s Doctor Octopus and Willem Dafoe’s Green Goblin are set to appear in Tom Holland’s Spider-Man: No Way Home.

Many Marvel fans are betting that the multiverse will introduce other Marvel characters to the Marvel Cinematic Universe, including Tom Hardy’s Venom and even the X-Men.

Topher Grace, best known for his portrayal of Eddie Brock/Venom in Spider-Man 3 alongside Tobey Maguire, recently dropped the (comedic) ball about appearing in Spider-Man: No Way Home.

“Please keep it between us but yes, I am in it.”

“The plot starts with Peter Parker (Tom Holland) bummed that everyone knows his identity and then some crazy s–t happens with Dr. Strange and Dr. Octopus (Alfred Molina) comes into his dimension. Then Electro and the Green Goblin hop out of one of those ‘energy circles’ and they’re like ‘It’s spider stompin’ time.'”

“Then Tom Hardy and I pop out and battle each other and I win (obvi), it’s like not even a fight I just kick his ass immediately. Not to give too much away but there are also some actors from the original ’70s Spiderman show, Aquaman and Batman (Affleck, not Keaton) crossover, and thanks to Disney Han Solo’s ghost from Rise of Skywalker, and that Eve robot from Wall-E. Again, please keep between us.”

Grace tossed out hilarious quips faster than Spider-Man, and his knowledge of comic book and Disney characters is outright impressive.

Topher Grace is obviously joking about the Venom crossover in No Way Home, or Kevin Feige and Marvel would be on red alert! The inclusion of Michael Keaton’s Batman in the Marvel Universe was a dead giveaway (as if we didn’t catch the joke earlier), but absolutely hilarious.

Tom Hardy recently revealed that he “would do anything to make that [crossover] happen.” Hardy’s Venom: Let There Be Carnage (2021) is nearly in theaters and the Sony star is ready for his iconic villain to officially step into Marvel’s New York with Tom Holland, Captain America (Anthony Mackie), and Doctor Strange (Benedict Cumberbatch).

In what will be Holland’s last outing with Marvel as Peter Parker/Spider-Man, Kevin Feige and crew are pulling all the stops for the Marvel film. Jaime Foxx’s Electro from Andrew Garfield’s The Amazing Spider-Man 2 (2014) will be joining what fans believe are supervillains Lizard (Rhys Ifans), Vulture (Michael Keaton), and Sandman (Thomas Haden Church).

Do you want to see Venom in No Way Home? Let us know in the comments below!