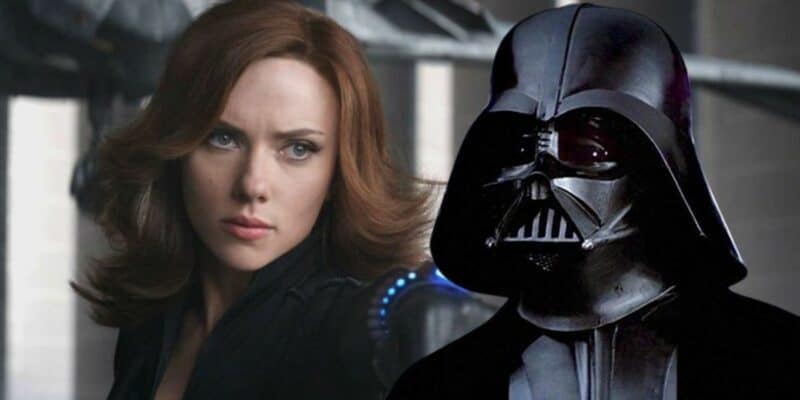 Marvel’s What If…? has been blowing minds week after week. Uatu the Watcher (Jeffrey Wright) has been guiding Marvel fans through alternate timelines within the Marvel multiverse but in the latest episode he took them where no one ever expected to go – the Star Wars Universe.

*Spoilers for Marvel’s What If…? Episode 8 “What If…Ultron Won?” Below*

The penultimate episode of Marvel Studio’s first animated series set in the MCU had a darker ton like so many episodes before it. It killed off Tony Stark AKA Iron Man (voiced by Mick Wingert and not Robert Downey Jr.) for the fifth time in the series. And it followed the two surviving Avengers: Natasha Romanoff AKA Black Widow (voiced by Lake Bell and not Scarlett Johansson) and Clint Barton AKA Hawkeye (Jeremy Renner) in the post-apocalyptic wasteland.

In this alternate reality, Ultron (voiced by Ross Marquand and not James Spader) defeated the Avengers, took over the Earth, and then killed Thanos (Josh Brolin) when he arrived for the Mind Stone. Now in possession of all six Infinity Stones, Ultron wipes out all life in his reality before becoming aware that he is being watched.

Like Doctor Strange Supreme (Benedict Cumberbatch) in Episode 4 “What If…Doctor Strange Lost His Heart Instead of His Hands?” Ultron has become powerful enough to see through the walls of the Marvel multiverse.

From there he battles the Watcher, and they tear through countless realities one after another. This includes one where Steve Rogers AKA Captain America is being sworn in as President.

In a blink and you will miss it the moment they briefly arrive on red lava world and eagle-eyed fans realized instantly that this was not a place from the Marvel Universe but the Star Wars Universe – Mustafar.

In the background, clearly visible is Darth Vader’s castle first seen in Rogue One (2016). Mustafar is the infamous site where Obi-Wan Kenobi (Ewan McGregor) dismembered Anakin Skywalker (Hayden Christensen), sending him on his path to becoming Darth Vader at the end of Star Wars: Episode III Revenge of the Sith (2005).

The official description of Mustafar from Star Wars is:

A tiny, fiery planet in the Outer Rim, Mustafar maintains an erratic orbit between two gas giants. Mustafar is rich in unique and valuable minerals which have long been mined by the Tech Union. Its lava pits and rivers make this planet a dangerous habitat; its natives have burly, tough bodies that can withstand extreme heat.

That is exactly what Marvel fans see when the Watcher and Ultron and quickly pass through the scene and that is not even the only Star Wars reference in this episode.

Related: Could Marvel Secretly Bring Back Their Best Villain in the Next Movie?

Marvel’s Phase 2 had a running Star Wars reference where every movie in Phase 2 had someone lose a hand as an homage to Star Wars: Episode V – The Empire Strikes Back (1980). In Empire Luke Skywalker (Mark Hamill) loses his arm in the duel with his father Darth Vader.

In Iron Man 3 (2013) Aldrich Killian (Guy Pearce) lost his hand. In Thor: The Dark World (2013) the trickster god Loki (Tom Hiddleston) uses a magical illusion to make it appear as though he cuts off his brother Thor’s (Chris Hemsworth) hand. Marvel shows us Bucky Barnes (Sebastian Stan) lose his hand as he becomes the Winter Soldier at the start of Captain America: The Winter Soldier (2014).

The list goes on. But why does this matter for this episode of What If…?. Well, it takes place at the same time as Avengers: Age of Ultron (2015), which was set in Phase 2. In the Marvel movie, Ulysses Klaue (Andy Serkis) was the one to lose his hand, but in this episode, it was Clint Barton.

The episode also calls back the scene on Vormir in Avengers: Endgame (2019), when Natasha sacrificed herself for the soul stone. Many fans have said it should have been Clint and it seems like they get their wish as he sacrifices himself to allow Natasha and Armin Zola (Toby Jones) to escape and have a chance to save the Multiverse.

So, what does this mean? Could more Star Wars be in store for the Marvel Universe? Both franchises are owned by Disney so it’s not impossible. They have crossed over in the comics before. Yoda showed up in the background of Uncanny X-Men #245 (1989) by Chris Claremont. And the Guardians of the Galaxy came across some of the Star Wars language Aurebesh in Guardians of Infinity.

Star Wars just launched their own anime anthology series Star Wars: Visions which is streaming along side What If…? on Disney+. Perhaps a future installment could return the favor? Or it could just be a fun easter egg for fans.

Let us know in the comments if you caught this Star Wars reference,