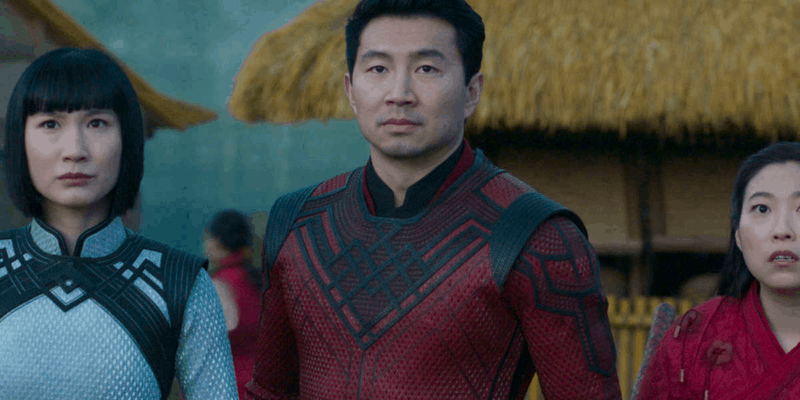 Marvel Studios literally made a list of racist Asian stereotypes to confront and dispel in the MCU Phase 4 film, Shang-Chi and the Legend of the Ten Rings (2021) starring Simu Liu as the titular character. In a new interview, Shang-Chi writer Dave Callaham revealed that Marvel Studios not only wants to address these racist film tropes but is “looking to destroy” Asian stereotypes with the latest Marvel movie.

Marvel’s Shang-Chi and the Legend of the Ten Rings (2021) has been enjoying glowing early reviews following the film’s red carpet premiere and early IMAX screenings. Shang-Chi actor Simu Liu is set to lead a star-studded, predominantly Asian cast when the film bows with a wide release on September 3.

However, the positive early reception of Shang-Chi has not been entirely free from controversy. The problematic origins of kung fu master Shang-Chi in Marvel Comics — specifically his Asian stereotype father, the evil Fu Manchu — have swirled around the Marvel movie since the project was first announced.

Fu Manchu and The Mandarin

Marvel Studios president Kevin Feige has had to publicly battle the Fu Manchu controversy following reports that Shang-Chi will not get a release in China in part because of the lead character’s racist origins. Marvel boss Feige has made it clear that the new Marvel Cinematic Universe Shang-Chi has nothing to do with Fu Manchu, and that the notorious pulp villain has no place in the MCU. Feige spoke to Chinese blog Sina Weibo (via Variety), to directly address the Fu Manchu discord, saying,

Indeed, Fu Manchu has been completely excised from the MCU, with Shang-Chi’s parentage being reimagined. In the film, Shang-Chi is now the son of Wenwu (Tony Leung), the Marvel Cinematic Universe incarnation of Iron Man arch-nemesis, the superpowered kung fu master, Mandarin.

In a new interview with Inverse, Shang-Chi writer Dave Callaham discussed how he wanted to change end negative depictions of Asians in media — like Fu Manchu — by taking them head-on in Shang-Chi. Callaham shared his thoughts on damaging, racial stereotypes of Asians in cinema, saying

“It’s way easier to be violent or hateful to someone you don’t see the same as you. With [the history of] Asian representation in the media, it’s not just that we’ve been invisible for a long time. It’s beyond that. We’re the butt of jokes and stereotypes that are damaging. It’s not nothing.”

The writer elaborated that Marvel Studios literally came up with a “physical list” of things they were “looking to destroy” in Shang-Chi, describing the list of Asian stereotypes as “the Wenwu List.” Callaham explained,

“It became the ‘Wenwu List’ of stereotypes we wanted to explode. We knew this needs to be a character not intent on destroying the world, not mysterious or sneaky, or a sorcerer whose magic Westerners cannot understand.”

It seems like the leaked Spider-Man: No Way Home trailer came out at just the right time for Marvel Studios, following a few public stumbles with the promotion of Shang-Chi. On a recent investor’s call, Disney CEO Bob Chapek referred to Marvel’s Shang-Chi and the Legend of the Ten Rings as “an interesting experiment” — a comment that Shang-Chi star Simu Liu didn’t like. Simu Liu took to his Twitter page to publicly express his displeasure with the comment by Bob Chapek, saying,

“We are not an experiment. We are the underdog; the underestimated. We are the ceiling-breakers. We are the celebration of culture and joy that will persevere after an embattled year. We are the surprise. I’m fired the **** up to make history on September 3rd; JOIN US.”

Marvel boss Kevin Feige quickly got into damage control mode as he sought to smooth over the spat, explaining that perhaps Liu had not gotten Chapek’s comments with full context. The Marvel Studios president summed up the misunderstanding, saying Chapek was intending to describe the Shang-Chi 45-day exclusive theatrical window as “the experiment,” rather than the predominantly Asian cast of Marvel’s Shang-Chi film.

“I think in that particular tweet you can see, and I think everyone does, a misunderstanding. It was not the intention. The proof is in the movie and we swing for the fences as we always do. With the amount of creative energy we put in and the budget, there’s no expense spared to bring this origin story to the screen.”

Awkwafina and the Shang-Chi boycott

Shang-Chi star Awkwafina — who plays Shang-Chi’s close friend Katy in the upcoming film — has come under fire for what her critics are calling cultural appropriation. Some Marvel fans have planned to boycott Shang-Chi accusing Awkwafina of appropriating slang and accents related to the Black community in an unflattering way in past performances.

Awkwafina — familiar to Disney fans for her role in Raya and the Last Dragon — has faced this accusation throughout her career. Her defenders say Awkwafina — a Long Island native — simply has a New York accent.

With many critics praising the heartfelt storyline of Shang-Chi and its mind-blowing kung fu fights and action sequences, it’s likely the Marvel Cinematic Universe entry will perform as well as expected at the box office despite the several controversies. Hopefully, Marvel’s Shang-Chi can not only entertain but also destroy those negative stereotypes the film seeks to confront.

Will you see Shang-Chi and the Legend of the Ten Rings in theaters? Let us know in the comments!