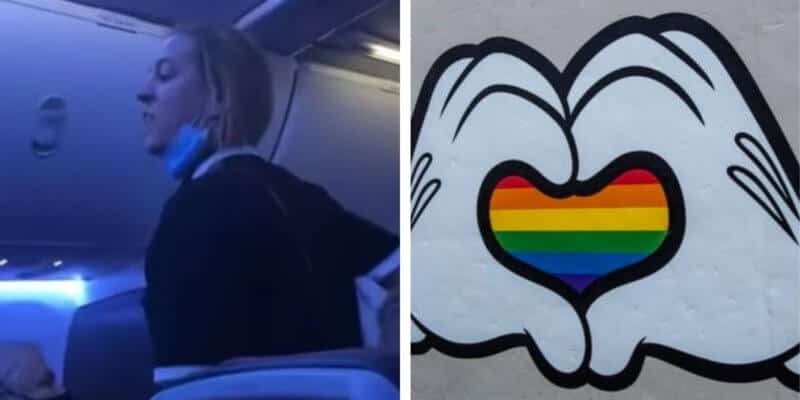 The Walt Disney Company has been hard at work over the recent years to continuously find ways to ensure their films and theme parks are as inclusive as possible. Although many Disney fans are ecstatic to see these changes when it comes to representation and inclusivity, some think differently.

Recently, a video taken on an American Airlines aircraft back in June has been circulating the internet. In the video, we can see a passenger who refused to properly wear a mandatory face covering being removed from the plane. It seems that the plane had already left the gate when the passenger continuously refused to properly wear the face-covering, causing the plane to have to turn around to remove the passenger from the flight.

Reportedly, the flight was going from Dallas to Orlando, so there were likely many Guests onboard who were headed to Walt Disney World Resort, as that is one of the most popular destinations in Orlando, Florida.

The passenger who was asked to exit the plane became quite irate, which caused others to begin documenting her behavior. YouTuber Paddle Your Own Kanoo put together a video of select moments from the passenger’s rant, which included the passenger accusing the LGBTQ+ community of corrupting Disney.

Below, you can take a look at footage from the video for yourself. Please note that this video is not necessarily family-friendly due to the language used. If you would like just to hear one of the comments the passenger made regarding Disney, you can skip to 00:27.

As we mentioned, the flight was going to Orlando. Considering the conversation turned to Disney, it seems likely that this passenger may have been headed to the Most Magical Place on Earth before being removed from the plane.

Although this Disney fan had her own beliefs, Disney has implemented many changes lately to combat any feeling of exclusion for fans, Guests, and employees. In recent years, the company continues to strive toward inclusion and representation for fans of all backgrounds, even modifying the Cast Member dress code to become gender-inclusive to allow theme park employees more freedom of expression.

The Jungle Cruise attraction at Disney World and Disneyland has been reimagined to remove culturally inappropriate storylines and scenes. Splash Mountain is being reimagined to remove the Song of the South IP and replace it with Princess and the Frog in an effort to include more diverse stories in the theme parks. Many classic films on Disney+ have a cultural content warning on films to let viewers know that they are outdated.

When it comes to representation and inclusion for the LGBTQ+ community, Disney just finished celebrating Pride month and is also beginning to show a lot more representation from the community in their films. The theme parks even modified a greeting to become more gender-inclusive — you can read all about that here.

What do you think of the situation? Share your thoughts in the comments below.