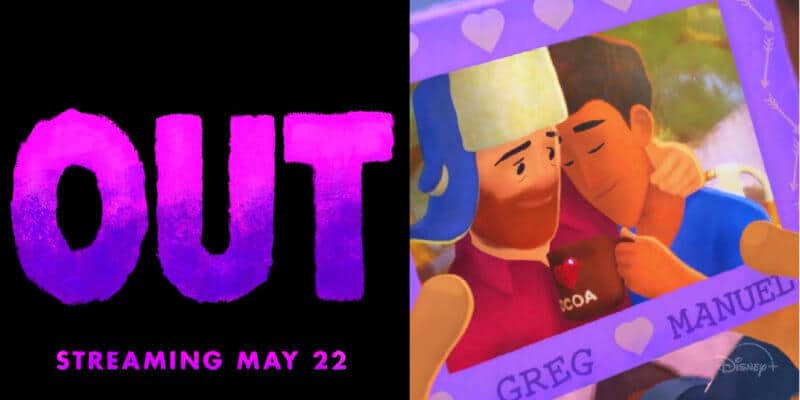 As we previously reported earlier this month, Disney’s Pixar announced a new SparkShort film to be released on May 22nd, 2020 titled, Out. Today, Disney released a trailer for the film, and it turns out that Pixar’s Out will feature its first gay protagonist!

New Information about Pixar Short “Out”

Previously, the only information we had about the film was the title, and a teaser image of a dog holding a toy of the character Wheezy from Toy Story. Based on the new trailer, it appears that the animated film will follow a gay character as he finds the courage to tell his parents that he is gay and dating another man. Going off of the scene with the couple in a picture frame, it appears that the name of the main character is Greg, and his boyfriend’s name is Manuel.

The latest heartwarming tale from @Pixar’s #SparkShorts. Start streaming Out tomorrow on #DisneyPlus.

The style of Out appears to look straight out of a storybook. It features diverse-looking characters, and an adorable dog, and will be available for streaming on Disney+ tomorrow!

While this isn’t the first instance of an LGBT character in Disney media, it would be the first time a gay person was the protagonist of an animated Disney film. This follows a trend of more LGBT representation in Disney media lately. When Disney Pixar’s Onward released this past March, it featured Pixar’s first openly gay character cyclops cop Officer Spector, played by actress Lena Waithe. Waithe’s character mentions her girlfriend and girlfriend’s daughter in one scene, and while the police officer was only a minor character in the movie, it was an important moment in defining the first openly gay character in a Disney movie.

Pixar’s “Out” will surely be a hit among Disney fans and resonate with LGBTQ+ viewers. This could be a hint that Disney may explore more narratives that feature homosexuality and LGBTQ representation.

What are your thoughts on this new short film? Are you excited about more queer representation in Disney media? Let us know your thoughts in the comments below!