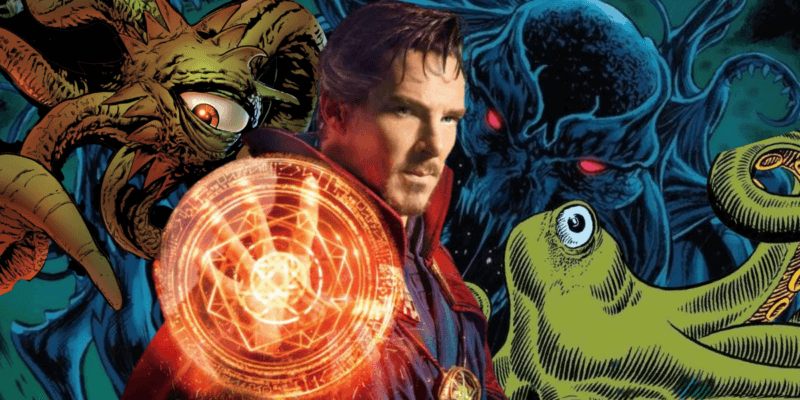 Marvel fans know that they better be prepared to be scared when Doctor Strange in the Multiverse of Madness hits theaters on March 25, 2022. Everything we’ve heard about the Doctor Strange (2016) sequel has us sitting on the edge of our seats including the latest casting news that reveals Doctor Strange (Benedict Cumberbatch) will be taking on a horrifying sea monster.

Yennifer Molina’s Mandy page shows that the actor has been cast in Doctor Strange 2. Her role is listed as “Gargantos Fight 2.” Molina’s credits include Pokémon Detective Pikachu (2019) and Tom and Jerry (2021). Gargantos is a very minor villain from Marvel Comics so it is unlikely the sea monster will be the main antagonist of the film.

CBR.com sums up the monster’s only two comic book appearances like this:

He is definitely not as friendly as the sea monsters from Luca (2021). Gargantos is most closely connected to Namor the Submariner in Marvel Comics so it could be another way for the MCU to tease the introduction of Atlantis and its Prince before his rumored introduction in the Black Panther sequel, Black Panther: Wakanda Forever on July 8, 2022.

But the giant squid monster is far from the only monster fans should expect in the Marvel movie. It has been described as the scariest MCU film yet and will be inspired by H.P. Lovecraft and his brand of monsters and horrors. It even pulls its name from one of Lovecraft’s most famous novella, At the Mountains of Madness.

What Other Monsters May Be Coming in ‘Doctor Strange 2’?

The Marvel film has been speculated to include a whole slew of monsters from the mind-melting Shuma-Gorath. The giant tentacle monster has been trying to return to Earth ever since he was banished along with the other Elder Gods and has gone up against Doctor Strange many times.

The archetypal Class Three demon, native to an extradimensional realm. He is one of the “Old Ones” who came to Earth untold millions of years ago, ruling it and feasting on mankind’s ancestors.

If It Is Not Shuma-Gorath, Then It Could Be Chthon

Fans believe Shuma-Gorath is most likely the main villain of Doctor Strange 2, but there are others that have been rumored to appear like the Darkhold-forging Chthon. His connection with Scarlet Witch makes him a definite possibility if she becomes a villain in the movie. In Marvel Comics, Wanda gets her Chaos magic from Chthon, who wants to use her status as a Nexus being to take over the Earth.

Earth’s first master of black magic, occupying his existence in the pursuit of knowledge of things which should not be. As with the majority of Elder Gods, Chthon began degeneration into a demonic state. […] Chthon inscribed all of his dark knowledge into indestructible parchments which would come to be known as the Darkhold.

Fans Will Never Forget About Mephisto

Mephisto is Marvel Comics’ version of Satan and fans have been obsessively looking for his MCU debut ever since he failed to appear in WandaVision. It’s become a running joke in the fandom and now that he definitely did not pop up in Loki fans have turned to the Doctor Strange sequel for their next best bet to bring Mephisto to the Marvel Universe. Beyond all the horrific monsters that Doctor Strange might reveal that Marvel’s devil could be behind it all.

Mephisto has an army of lesser demons that serve him. Any one of these beasts could add to the horror expected in Doctor Strange 2.

Doctor Strange in the Multiverse of Madness is still in post-production but it is set to be the most crucial film in Marvel’s Phase 4 plans. The movie will bring the Sorcerer Supreme together with Wanda Maximoff AKA Scarlet Witch (Elizabeth Olsen) though whether she will be a villain in the movie remains to be seen after her WandaVision post credit scene left her growing in dark magical power.

Tom Hiddleston’s Loki will be joining Doctor Strange to help fix the multiverse chaos that he and Lady Loki/Sylvie (Sophia Di Martino) unleashed in the final episode of the God of Mischief’s solo series Loki, airing now on Disney+.

Directed by Sam Raimi (original Spider-Man trilogy), the film will also connect to the events Spider-Man: No Way Home (December 17, 2021), which will feature Benedict Cumberbatch’s Doctor Strange and Peter Parker aka Spider-Man (Tom Holland) in Marvel Studios’ version of the Spider-Verse.

Writer Michael Waldron, who also worked on Loki has said the Doctor Strange sequel was inspired by Anthony Bourdain, and Indiana Jones. So be prepared for a thrilling adventure as Doctor Stephen Strange takes on unspeakable evil in whatever form it appears and from whatever alternate reality is hails from.

Let us know in the comments what monster you think is the scariest of all.