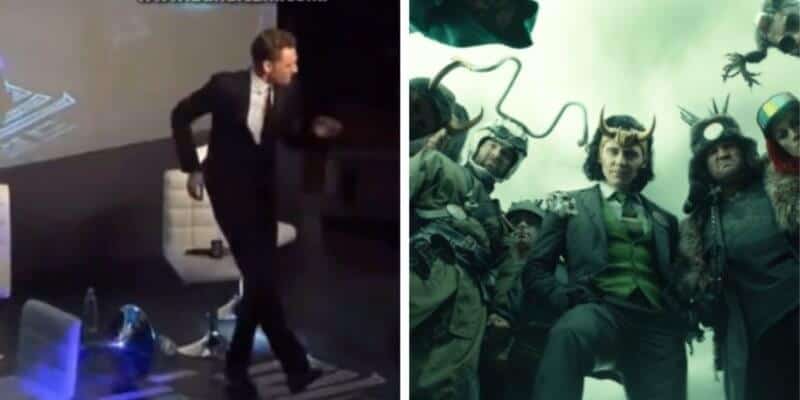 If you didn’t already have reason enough to love Marvel’s Tom Hiddleston, we have a few videos that will have you in Loki-heaven faster than a TemPad could bring you there.

Loki just wrapped its six-episode season on Disney+, and fans cannot get enough. The show ends with a lot of questions that need to be answered, and lucky for us, Marvel used the end credits to announce that Season 2 has already been confirmed. Lately, all of the Disney+ series that we have seen added to the Marvel Cinematic Universe, such as WandaVision, have set up Phase Four of the MCU.

Loki’s ending leaves the God of Mischief looking more like an Avenger than a villain as he tries to stop Kang’s reign, to an unfortunate failure due to Sylvie’s trickery. Over the course of the six episodes, Marvel fans have been able to dive deeper into Hiddleston’s Loki to see the trickster’s quirks come out — but those silly antics don’t stop there.

Hiddleston seems to be quite the dancer, constantly busting a move during late-night shows and press junkets. TikTok account Marvel Content (@M4rvelContent) has posted a couple of videos of Hiddleston breaking out into a dance, and his moves are hilarious.

In the first video with James Cordon, Hiddleston dances so hard his mic pack falls out!

In the second, his moves are so wild he literally kicks a chair over and doesn’t stop moving for a second!

If there is one thing Hiddleston has shown us, it’s that his dance moves are almost as powerful (and possibly more feared) than the God of Mischief himself!

Tom is reportedly asked to dance very often after multiple videos of his moves have gone viral. Personally, I would love to see Loki at a bar with a few drinks and a jukebox in Season 2!

What do you think of Tom Hiddleston’s dance moves? Let us know in the comments below!