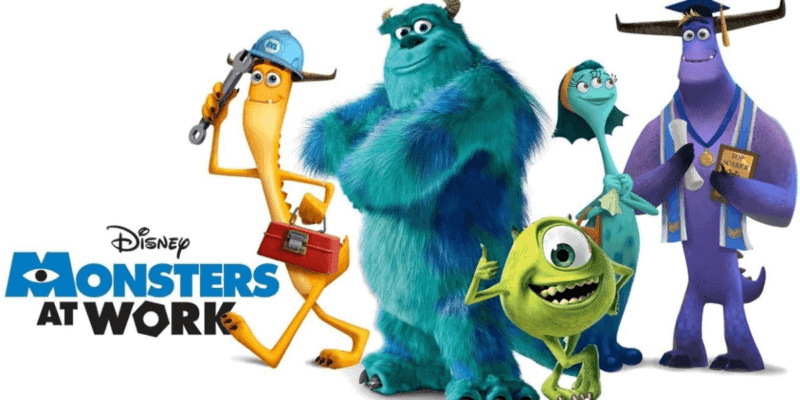 How can you catch up on the adventures of Mike Wazowski and Sully in the new streaming series Monsters at Work? Read on for cast, plot details, premiere date, and other vital information for the exciting new Disney series!

How can you watch Monsters at Work?

Monsters at Work is currently streaming on Disney+. You must be a Disney+ subscriber in order to stream episodes of the Monsters at Work series on your laptop, phone, smart TV, or favorite device. You can subscribe to Disney+ for $7.99 a month, or pay for the full year with an annual subscription rate of $79.99 for a total savings of nearly 20%.

Related: How to Get Disney+ FREE For Six Months!

You can score a Disney+ subscription free for 6 months by taking advantage of the current promotion and signing up for a new Amazon Music Unlimited subscription. Existing Amazon Music Unlimited subscribers are eligible for 3 months of free Disney+. This deal is a great opportunity to check out Monsters at Work, and all that Disney+ has to offer — like original series from Star Wars and the Marvel Cinematic Universe like The Mandalorian, Loki, The Bad Batch, and WandaVision. With Disney’s Premier Access, subscribers can also stream new feature films during their theatrical windows like Raya and The Last Dragon (2021) or Marvel’s Black Widow (2021) for an additional fee (typically $29.99).

You can also sign up for the Disney+ bundle that. in addition to the Disney+ service, includes access to ESPN+ and Hulu for $14 a month.

When does Monsters at Work premiere?

Season 1 of Monsters at Work premiered on Disney+ Wednesday, July 7, 2021. The first two episodes premiered on this date, and new episodes will be available to stream every Wednesday for the remainder of the season.

What is Monsters at Work about?

The original series picks up where the action of Monsters Inc. left off. Professional scarers Mike Wazowski (Billy Crystal) and James “Sulley” Sullivan (John Goodman) are leading an energy source transition for their home of Monstropolis — casting aside the harvesting of children’s terrified screams as fuel in favor of their much more energy-efficient laughter instead.

From the official Disney+ synopsis of Monsters at Work:

Tyler Tuskmon (Ben Feldman) graduates top of his class from Monsters University and arrives at Monsters Incorporated to begin his dream job as a Scarer… or not. The day he’s set to begin, he learns they don’t want Scarers…they want Jokesters! Tylor is temporarily reassigned to the Monsters, Inc. Facilities Team. This change shatters Tylor’s plan, but he set his sights on a new goal: becoming a Jokester.

Who is in the new Monsters at Work series cast?

Stars of the original films from Disney / Pixar, John Goodman (James “Sulley” Sullivan) and Billy Crystal (Mike Wazowski) are back to lend their familiar voices to the original series. Jennifer Tilly returns as Mike’s significant other Celia Mae, and Bob Peterson is back to portray slug twin sisters Roz and Roze. Bonnie Hunt will also appear as Ms. Flint and the Pixar workhorse John Ratzenberger voices the Abominable Snowman.

Some new monsters will be joining the Monstropolis energy company in the new series. The aforementioned Ben Feldman will lend his voice to eager young monster, and wannabe scarer Tyler Tuskmon. You may recognize Ben Feldman from his roles on Superstore and Mad Men.

Other new monsters joining Monsters at Work include:

How many episodes are in the original series Monsters at Work?

There are 10 episodes of Monsters at Work scheduled to air during Season 1. The first 2 episodes, “Welcome to Monsters, Incorporated” (27-minute runtime) and “Meet Mift” (25-minute runtime) premiered on July 7, 2021, and new episodes will drop every Wednesday on Disney+.

Check out the official trailer from Disney+ here:

Are you excited to see the Monsters, Inc. crew led by Sully (John Goodman) and Mike Wazowski (Billy Crystal) in the Disney+ streaming series Monsters At Work? Let us know in the comments!

Comments Off on How to Watch ‘Monsters, Inc.’ Sequel Series ‘Monsters at Work’