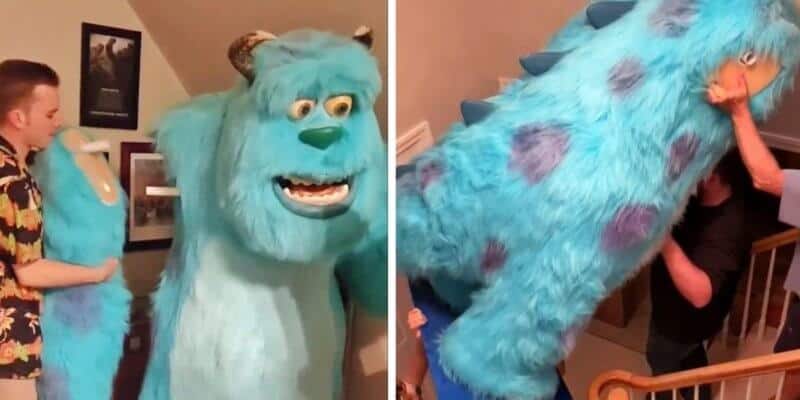 Disney fans like to share their love for Disney in a variety of ways. From booking Disney vacations to decorating your home to binging Disney films and series weekly, there is no shortage of magic when it comes to Disney!

Some Disney fans may even love specific films so much that they collect life-size models of the characters. Andres Stonecypher (@stonecypherart) took to Twitter to post his experience moving his life-size Sully from Pixar’s Monsters Inc. from his parents’ hour to his house.

Although Andrew only showcased four photos, it seems pretty clear that moving a giant furry blue monster is not an easy feat and a task that needs three people to complete.

Moving my life size Sulley statue from my parent’s house down to my house. Kids DO NOT try this at home!

Moving my life size Sulley statue from my parent's house down to my house. Kids DO NOT try this at home! ? pic.twitter.com/niWq3mB3C3

As a Disney fan myself, I am not sure if I should be incredibly jealous that Andrew has a giant life-size Sully in his own home or if I should be terrified since I now cannot unsee Sully with a disembodied arm. It seems that the only way for Sully to fit going down the stairs required Andrew to take him apart! Personally, I would like to imagine that the three gentlemen recreated the iconic “pivot” scene from Friends, except instead of a couch, they used a giant Sully.

If you were like me and wondering where you too can own a life-size Sully, there is a set including a life-size Mike selling on eBay for $4,750.00. The collectibles were used as a theater display when the film premiered in 2001, and it seems that once the film left theaters, one lucky Disney fan scooped up the characters and brought them home.

In case that set sells, there is another similar set on sale for $5,500.00 as well. Click here to take a look. Hopefully, this version doesn’t have a Mike with a yellow eyeball.

What do you think of these life-size Monsters Inc. characters? Would you want one for your own home?