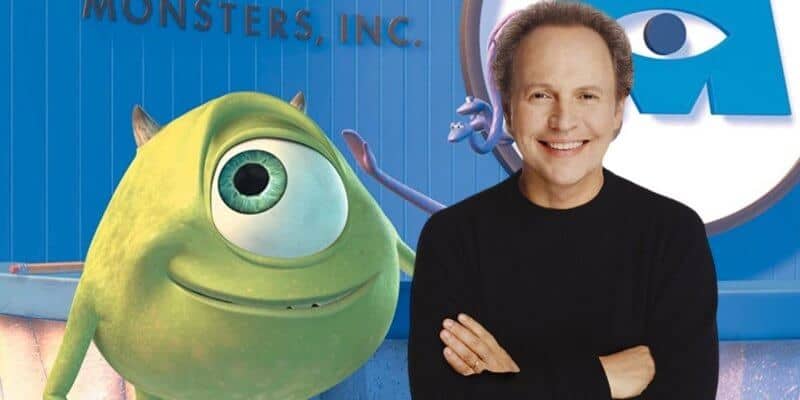 Billy Crystal, best known in the Disney community for voicing Mike Wazowski from Monsters, Inc. and Monsters University, is now gearing up for his new Disney+ series, Monsters at Work.

Today on Good Morning America, actor Billy Crystal not only spoke out about the upcoming Disney+ series, Monsters at Work, but also how he truly feels about Mike Wazowski. Crystal stated:

“I do. George, really, he’s like my favorite character. Out of anybody I’ve ever had the chance to play, on stage or in the movies, I love him because he’s so positive and he doesn’t let anything get in his way and I’ve always loved that about him and he’s unpredictable… He can break out into song, he’s romantic, he’s outrageous, and he tries so hard to be better than he really is.”

Crystal opened up about the upcoming Disney+ series, Monsters at Work, explaining how excited he is for the project to debut:

“Well, this series, which is a 10-parter, is really a continuation of Monsters, Inc. It starts, as you said, the day after the movie ended and so it’s not a sequel, it’s a continuing story. And John Goodman and I are back, but there’s also all these wonderfully funny and inventive new characters and wonderful actors playing them — Mindy Kaling, Henry Winkler, young Ben Feldman…

And it’s a really great story because we’re harnessing the laughs of children instead of their screams and young Tyler Tuskman, who Ben Feldman plays, thought he had a job as a scarer only to come to the scare floor and find out that it’s the laugh floor and so you have these unfunny people trying to be funny, which makes it really funny.”

In a press release from Disney, the company shared what Guests can expect from the new series:

“Monsters at Work” takes place the day after the Monsters, Incorporated power plant started harvesting the laughter of children to fuel the city of Monstropolis, thanks to Mike and Sulley’s discovery that laughter generates ten times more energy than screams. It follows the story of Tylor Tuskmon, an eager young monster who graduated top of his class at Monsters University and always dreamed of becoming a Scarer until he lands a job at Monsters, Incorporated, and discovers that scaring is out and laughter is in. After Tylor is temporarily reassigned to the Monsters, Inc. Facilities Team (MIFT), he must work alongside a misfit bunch of mechanics while setting his sights on becoming a Jokester.

Monsters at Work will premiere on Wednesday, July 7 on Disney+. If you are not yet signed up for the streaming service, you can get started here.

Are you a fan of Billy Crystal? Is Mike your favorite character from Monsters, Inc.? Let us know in the comments below.