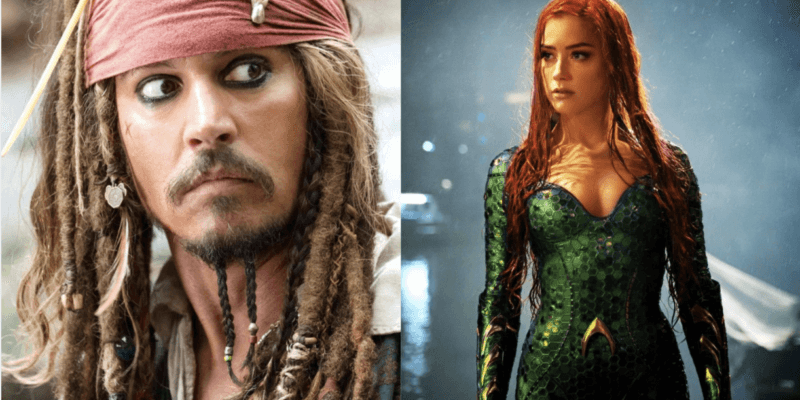 Actress Amber Heard (Aquaman, Aquaman 2) has had more than her fair share of media attention over the course of the last year, as her legal battle with ex-husband, actor Johnny Depp, has raged on.

The situation began when U.K. News Group newspaper publication, The Sun, printed an article alleging that Depp had engaged in domestic violence against Heard on multiple occasions. Depp’s lawyer Adam Waldman, the actor himself, and even his exes, Vanessa Paradis and Winona Ryder, have vehemently denied the domestic abuse accusations from the start.

Last fall, however, Depp lost his libel suit against the tabloid in the U.K. High Court, with Justice Andrew Nicol presiding. This ultimately led to the actor losing both of his major roles — Captain Jack Sparrow in Disney’s Pirates of the Caribbean franchise and Gellert Grindelwald in Warner Bros. Harry Potter Fantastic Beasts spinoff series.

Margot Robbie is set to helm the reported Pirates of the Caribbean 6, while Mads Mikkelsen (Rogue One: A Star Wars Story) will take over as Grindelwald in Fantastic Beasts 3.

Heard, however, despite acknowledging in her testimony during the libel case that she, too, was violent towards Depp at times, remains employed in Warner Bros. Aquaman franchise, much to Depp fans’ chagrin. Now, as Aquaman and the Lost Kingdom filming progresses, producer Peter Safran has backed up Heard’s previous claims that Depp’s supporters’ online campaigns to get her fired “have no basis in reality”.

“I don’t think we’re ever going to react to, honestly, pure fan pressure. You gotta do what’s best for the movie. We felt that if it’s James Wan, and Jason Momoa, it should be Amber Heard. That’s really what it was.”

“One is not unaware of what is going on in the Twitter-verse, but that doesn’t mean you have to react to it or take it as gospel or accede to their wishes. You have to do what’s right for the film, and that’s really where we landed on it.”

Safran’s comments stem from an interview Heard did with Entertainment Weekly last year, in which she was asked about the Change.org petition calling for her to be fired from the DC Comics film franchise:

“Paid rumors and paid campaigns on social media don’t dictate [casting decisions] because they have no basis in reality. Only the fans actually made Aquaman and Aquaman 2 happen. I’m excited to get started next year.”

At this time, we do not know how movie fans’ opinion of Warner Bros. — and of the controversial actress — will impact the Aquaman sequel’s box office take. Heard’s allegations have seemingly had a serious impact on the fan opinion of the actress.

Depp and Heard are next due in court for their $50 million U.S. civil suit in April in Fairfax, Virginia.

What do you think? Was the Aquaman 2 production team right to ignore fan opinion?