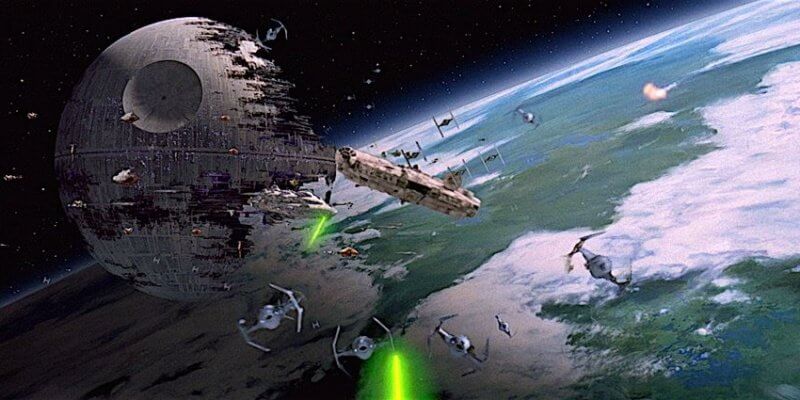 There are times when the galaxy far, far away seems to intersect with real-life here on Earth. From James Gunn and Mark Hamill hilariously threatening to “sue” the U.S. Space Force to scientists discovering a real planet that looks like Tatooine to an actual version of sequel trilogy droid BB-8 being sent to the moon, Star Wars sometimes doesn’t feel like pure science fiction.

Now, even the National Aeronautics and Space Administration (NASA) has gotten involved in Star Wars vs. real-life debate. Recently, NASA shared some new images of the surface of Mars taken by the Ingenuity rotorcraft that is currently roaming the planet.

NASA did so to remind space lovers that they can download raw images taken by Ingenuity online 24/7. However, these particular images sparked an unexpected reaction — people were alarmed by the fact that the Galactic Empire’s Death Star appeared to be in one of the pictures.

In the photo [above] you can see what appears to be the Death Star looming on the left-hand side of the image.  NASA’s Jet Propulsion Laboratory actually issued a response to one Twitter follower who asked if the Death Star was present in the image.

Is that Death Star on the left?

We’re not going to lie, though, we totally see the resemblance.

Ingenuity launched on July 30, 2020 from Cape Canaveral Air Force Station, Florida and landed on Mars on February 18, 2021. The official fact sheet for the rover describes Ingenuity as:

The Mars Helicopter, Ingenuity, is a small, autonomous aircraft that will be carried to the surface of the Red Planet attached to the belly of the Perseverance rover. Its mission is experimental in nature and completely independent of the rover’s science mission. In the months after landing, the helicopter will be placed on the surface to test – for the first time ever – powered flight in the thin Martian air. Its performance during these experimental test flights will help inform decisions relating to considering small helicopters for future Mars missions, where they could perform in a support role as robotic scouts, surveying terrain from above, or as full standalone science craft carrying instrument payloads. Taking to the air would. give scientists a new perspective on a region’s geology and even allow them to peer into areas that are too steep or slippery to send a rover. In the distant future, they might even help astronauts explore Mars.

The project is solely a demonstration of technology; it is not designed to support the Mars 2020/Perseverance mission, which is searching for signs of ancient life and collecting samples of rock and sediment in tubes for potential return to Earth by later missions [even, potentially, human exploration of the red planet].

More on the Death Star

The Death Star is one of the most well-known weapons in the Star Wars universe. It played a major role in George Lucas’s entire Star Wars original trilogy — Episode IV – A New Hope (1977), Episode V – The Empire Strikes Back (1980), and Episode VI – Return of the Jedi (1983) — and in the standalone prequel film, Rogue One: A Star Wars Story (2016).

Rogue One features the aftermath of Galen Erso’s (Mads Mikkelsen) attempt to sabotage the Death Star after being conscripted by Imperial forces to help design it. His daughter, Jyn Erso (Felicity Jones), works with a motley crew of companions, including Captain Cassian Andor (Diego Luna) and droid K-2SO (Alan Tudyk) to try to steal the plans for the galaxy’s most dangerous weapon.

The official Star Wars Databank describes the Death Star as:

The Death Star was the Empire’s ultimate weapon: a moon-sized space station with the ability to destroy an entire planet. But the Emperor and Imperial officers like Grand Moff Tarkin underestimated the tenacity of the Rebel Alliance, who refused to bow to this technological terror…

What do you think about NASA’s unintentionally hilarious Martian photo?

Comments Off on After Crazy Photo, NASA Assures Americans the Death Star Isn’t on Mars