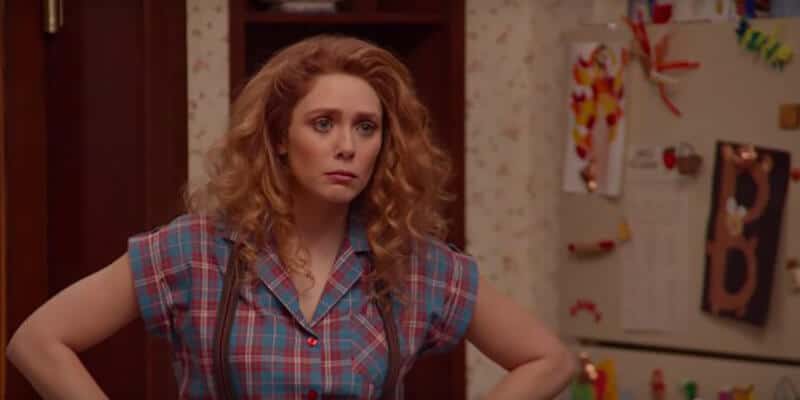 The ladies discussed their latest projects, WandaVision for Olsen and The Flight Attendant for Cuoco. Inevitably, the prospect of whether or not there will be a Season 2 of the MCU’s first TV show came up during the conversation.

When Olsen asked when Cuoco would start filming her show’s second season, Cuoco returned the favor by trying to get Olsen to confirm if there would be a second season of WandaVision.

“No. No,” Olsen responded immediately. “It’s definitely a limited series.”

“Limited series,” Cuoco answered slyly, reminding Olsen that her show had said the same thing before it was renewed.

Related: Marvel Writer Claims To Be “Disappointment to the Fandom”

Marvel Studios President Kevin Feige has also played coy when asked about a second season of the hit streaming series, but it seems that there are no active plans for the story of Salem witch Agatha Harkness (Kathryn Hahn) and the citizens of Westview, New Jersey to continue now that Wanda’s Hex has been dismantled.

Olsen went on to share that she does love doing television, and would clearly be open to reprising her MCU role in another series — or WandaVision Season 2, if it happened — in the future:

“The thing that I did learn through Sorry For Your Loss and WandaVision is that I love doing television,” the actress continued. “And I do miss, I think, the four-five week experience of making a film – it just feels so exciting and like camp for a little bit. But I think this six month experience of really hard work with the same people and it’s exhausting…it just feels really good.”

At this time, we don’t know where Vision (Paul Bettany) will show up again after Wanda was forced to let him go in the WandaVision finale episode. As it turned out, the Scarlet Witch had, in her immense grief, unwittingly used chaos magic to bring her dead husband back after he was killed by Thanos (Josh Brolin) in Avengers: Infinity War (2018).

As for Olsen’s character, she will play a key role in Doctor Strange and the Multiverse of Madness (2022). Her twin sons, Billy and Tommy, are also expected to appear in the film with Benedict Cumberbatch (Dr. Stephen Strange).

Breakout WandaVision star Teyonah Parris (Monica Rambeau) also has a future in the MCU. She will appear alongside Brie Larson in The Marvels (2022).

What do you think? Should there be a WandaVision Season 2 that features more classic sitcom references?

Comments Off on Elizabeth Olsen: “Never Say No” to More ‘WandaVision’