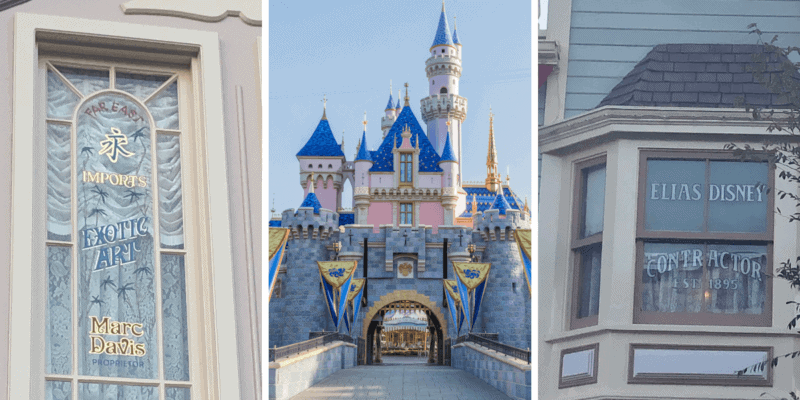 There is nothing like entering the gates of Disneyland and the view on Main Street, U.S.A., with the beautiful Sleeping Beauty Castle gleaming in the distance! So much creativity, imagination, and magic went into making this view what it is today. But did you know that these creative minds are honored throughout Main Street and are forever a part of Disney history?

As you take a stroll down Main Street at the Disney Park, you might recognize a name or two if you happen to look up at the windows. But first, we have to go back to where it all started and who is responsible for creating these famed windows.

Disney Legend Harper Goff first met Walt Disney at a small shop in London. After learning that Goff was an artist, Walt had asked to speak when he returned to the United States.

He and Walt also shared a mutual love of trains — which is perhaps a part of why he had a big hand in designing Disneyland’s Main Street and its windows. Goff also designed the Jungle Cruise and did production design for Disney’s 20,000 Leagues Under the Sea. He would later go on to help design Walt Disney World’s EPCOT Center and is responsible for the layout of the World Showcase. Goff additionally designed concepts for the United Kingdom, Italy, and Japan pavilions.

When developing Main Street, Walt envisioned the second story facades of the retail shops and buildings to be false businesses. He also saw this as an opportunity to honor the ones who helped turn his Disneyland dream into a reality. Walt relied on Harper Goff to design these windows and make them what they are today!

Inspirations Behind the Main Street, U.S.A. windows at Disneyland

There are many Disney legends and Walt Disney Imagineers that are honored by these windows. The Disneyland Resort has even unveiled more windows to honorees throughout the years. Here are some of these famed windows with names you might recognize.

If you do not know Richard M. and Robert B. Sherman by name, you definitely know one of their tunes. One of their most famous of which is depicted in their window, “it’s a small world.” Unlike most of the honored windows that are on the second story, the Sherman’s sits on the first floor near the Magic Shop. Also included in the window depiction is the quote, “We’ll write your tunes for a song!”

Related: Legendary Disney songwriters The Sherman Brothers to be honored at special event

These next set of windows honors a couple as well, a husband and wife to be exact. Marc and Alice Davis are husband and wife Imagineers. Marc was not only an Imagineer but also an animator and artist. He is most known for his development of some fan favorite women characters in Disney films, such as Maleficent, Cruella De Vil, and Tinker Bell. He also helped in the creation of Walt Disney’s Enchanted Tiki Room, Pirates of the Caribbean, Haunted Mansion, “it’s a small world”, and the Jungle Cruise.

Alice Davis, also a Disney Imagineer, had first begun her Disney career with creating the dress used in the live action reference footage for Sleeping Beauty. In 1963, Alice went on to design highly detailed costumes for the Audio Animatronics used in the “it’s a small world” attraction. She then worked with her husband to create the costumes used in Pirates of the Caribbean at Disneyland. She was honored with a Main Street window that sits next to her husband’s in 2012.

Known as a Jack of all trades, Ken Anderson got his start with Disney by pulling over when he saw the Walt Disney Studio, and applied for a position. His first project was as art director for Snow White and the Seven Dwarfs. Later, when Walt Disney had Disneyland in the works, he turned to Anderson for his concept drawings and designs for Peter Pan’s Flight, Storybook Land Canal Boats, and Mr. Toad’s Wild Ride in Fantasyland.

Dominguez was a former Disney executive for attractions, but that’s not his only ties to the Disneyland Resort. His family actually owned some acreage that was later turned into Disneyland. Dominguez and his family lived at the orange property until the land was bought out by Walt Disney in 1954. Dominguez has said that their house is located right about where the entrance to the Pirates of the Caribbean attraction is. Ron later went to work for the company, starting off as a ticket taker.

If you’re a big Disney fan, there’s a good chance you know this Imagineer and all he’s accomplished with the company. Tony Baxter has lent his talents to many attractions at the Disneyland Resort, including Big Thunder Mountain Railroad, Splash Mountain, Star Tours, Indiana Jones Adventure, Finding Nemo Submarine Voyage, and the Fantasy Faire. Baxter is also responsible for the Journey into Imagination pavilion at Walt Disney World’s EPCOT. On top of that, he was the senior vice president of concept development, design, and creation of Disneyland Paris.

When he was honored with his window in 2013, Baxter had this to say:

“The names on those windows gave the world a very magical kingdom, but more importantly, created a yardstick by which everything that’s followed Disneyland has been measured. I was fortunate to know and work with many of these people. To be included with them here at Disneyland, is to me, the ultimate honor.” 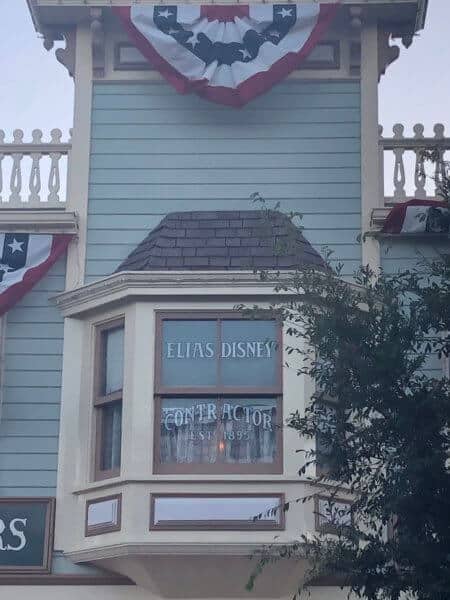 Father of Walt and Roy Disney, Elias Disney was originally from Canada as the son of Irish immigrants. After meeting his future wife Flora in Florida, the Disney’s moved around from Chicago, and then later to Marceline, Missouri. This is where Walt developed his love for animals while living in rural Marceline. They later moved to Kansas City, where Elias had a successful newspaper delivery route.

Walt and Roy respected their father for all his hard work and dedication to his family. That’s why on Disneyland opening day in 1955, Walt wanted to pay tribute to his father, who was believed to start his contracting business in 1895.

How They Differ Between Disneyland and Other Disney Parks

Not only Disneyland has adorned their windows with memorable Disney honorees. At Walt Disney World’s Magic Kingdom, you can see more honored Disney historians on Main Street, U.S.A.

For example, you just might see dedications to Ub and Don Iwerks. This father and son duo lent their talents to many Disney film projects as animators and special effects icons. Don decided to follow in his father Ub’s (co-creator of Mickey Mouse) footsteps and continue to make Disney magic for the screen.

Related: Leslie Iwerks Shares the Magic Behind “The Imagineering Story” on Disney+

Other honorees include Yale Gracey, Bud Martin, Ken O’Brien, and Wathel Rogers who happen to share a window at the Magic Kingdom. These talented gentlemen were skilled in developing special effects for many attractions. The attractions they worked on are Haunted Mansion — specifically the Pepper’s Ghost illusion — as well as the Hall of Presidents, Country Bear Jamboree, and Pirates of the Caribbean. They are also honored with tombstones throughout the queue of Magic Kingdom’s Haunted Mansion attraction.

Related: Hidden References to Disney’s Imagineers You Can Spot at Walt Disney World

There are plenty more honored windows to see at both the Disneyland and Walt Disney World Resort as you stroll down Main Street, U.S.A., if you take your time and remember to look up!

Have you noticed any of these famed windows at either theme park before? Which ones are your favorites? Let us know in the comments!

Want to see the Disneyland Main Street windows for yourself? Let Academy Travel help you plan your Disney vacation to the Happiest Place on Earth!

Comments Off on Behind the Scenes: Creating Disneyland’s Main Street Windows