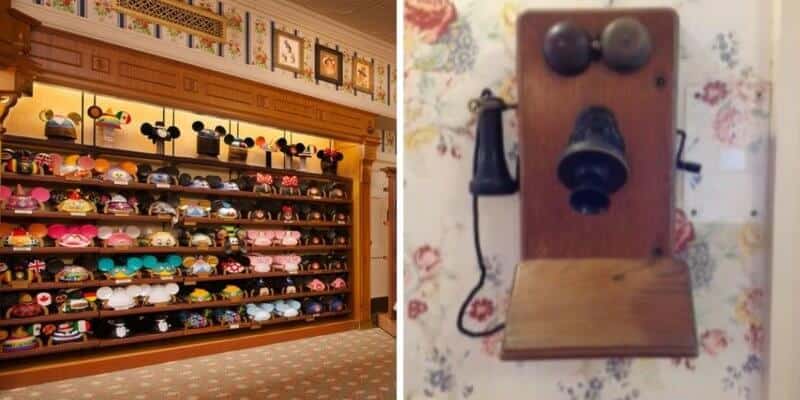 Walt Disney World is home to many hidden treasures, but did you know about the secret conversation that plays inside The Chapeau on Main Street, U.S.A.?

Located inside Magic Kingdom on Main Street, U.S.A., The Chapeau is a shop that sells a variety of hats to Guests. From Minnie Ears to baseball caps, if you are looking to add headwear to your collection, The Chapeau is the spot to shop.

However, did you also know it is home to an old-fashioned, hand-cranked telephone? But this isn’t just any old prop. What many don’t realize is that if you pick up the phone, you will listen in on a secret conversation!

(Did you know? There is actually another Disney phone that plays a secret conversaiton! It’s actually located in Market House — AKA Starbucks — on Main Street, U.S.A. in Disneyland Park in California! Disney keeps this tradition alive in both parks. But for this fun article today, we’ll be focusing on the Magic Kingdom in Florida.)

On your next Walt Disney World vacation, make sure to swing by The Chapeau and pick up the telephone because you can listen in on a party-line from the past!

The neighbors on the line are gossiping and even offer some life advice — making for a fun, secret conversation. It may seem like an ordinary phone prop, but this just goes to show that the Imagineers have gone the extra mile to really bring magic to Guests in every way possible.

You can listen to a snippet of the secret conversation heard on the telephone inside The Chapeau in the YouTube video below. The caption to the video reads:

An audio recording of the audio loop that guests can listen to when the pick up the telephone in the Chapeau shop inside the Magic Kingdom! […]

The telephone party line that now found in the Magic Kingdom’s Chapeau was originally located in the Main Street Market House, which was designed to look like a turn of the century grocery store. Beginning in 1971, when unsuspecting guests would up the old fashioned telephone, they could listen in on a 3:30 conversation between a worried mother and her daughter, who was off buying groceries at Mr. Dinglinger’s General Store.

In 2007 when the Main Street Market House closed, the telephone was moved to the far end of the Chapeau on Main Street, where it still can be found today.

More on The Chapeau

The Chapeau is a shop located on Main Street, U.S.A. in Magic Kingdom right next to The Confectionary and Town Square. It is home to several types of hats including baseball caps, Minnie Ears, Mickey Ear hats, and more!

If you are looking for that perfect pair of Minnie Ears on your next Disney World vacation, The Chapeau is the place to go.

Related: Disney’s Long Kept Secret That May Never Come Out Of The Disney Vault

Did you know about the secret conversation that happens on the telephone in The Chapaeu? Have you ever listened in? Let us know in the comments below.

If you want to visit Magic Kingdom on your next Disney vacation and check out this hidden treasure, you can start planning today!