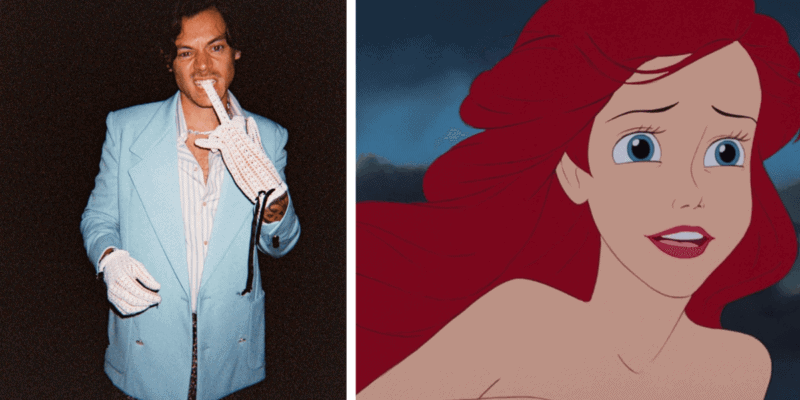 Harry Styles is one of the most beloved performers in recent years. Starting his musical career as one-fifth of global superstar band, One Direction, he then went out to carve a successful solo career and establish himself as one of the industry’s most celebrated artists. Styles also often hits the headlines for his sense of style and they way he defies gender stereotypes — famously appearing in a dress on the cover of Vogue. The singer has played his hand in the acting game too, appearing in the blockbuster hit Dunkirk (2017) — the World War II film, directed by Christopher Nolan.

And now, Styles has hit the headlines again as old Saturday Night Live (SNL) promo photos of him dressed as Disney’s iconic Little Mermaid, Princess Ariel. The SNL photoshoot never made it to the program which makes their sudden reappearance online all the more interesting. The origins of the reason behind the photos has never been clear, although it could have something to do with Styles’ heavily theorized appearance as Prince Eric in the live-action remake of The Little Mermaid.

Nonetheless, upon the Harry Styles mermaid photo’s reentry into the online stratosphere, the internet quickly broke down. Tweets poured in over the performer’s take on Disney’s famous mermaid, which also featured a glass of champagne and a cigarette — a far cry from the ocean princess we know and love in The Little Mermaid (1989).

Let’s take a look at the photo and what happened afterwards!

Photos of Harry Styles dressed as Ariel from ‘The Little Mermaid’ have resurfaced.

Photos of Harry Styles dressed as Ariel from ‘The Little Mermaid’ have resurfaced. pic.twitter.com/YICYiIDIew

i love the word “resurfaced” here as if this is a problematic scandal and not just him dressed as a fish https://t.co/taRGfSZFKW

Rob S. (@robsheff) used the lyrics from “Part of Your World” — which Jodi Benson, Howard Ashman and Alan Menken made famous — to express their views on the photoshoot.

One fan collaged the photos into ocean scenes to look like the original film. @Mrs_McQueen69 said:

#HarryStyles is my favorite Disney princess

On some of the backlash, Styles often receives from the public, another social media user, Ellie (@adorehitties) said:

In 2019, Styles abolished the rumors that he would star in the live-action The Little Mermaid remake by stating he wanted to focus on his burgeoning music career. It’s worked, Styles’ first self-titled album, Harry Styles (2017) and his second, Fine Line (2019), both debuted atop global music charts including the Billboard 200.

Who is in The Little Mermaid remake?

While Harry Styles isn’t part of the The Little Mermaid remake — which recently began it’s second leg of filming in the Mediterranean after leaving Pinewood Studios in London — the cast is still extremely noteworthy. Halle Bailey — who is known as one half of R&B sister duo, Chloe x Halle — while take on the famous mermaid, Ariel, with Melissa McCarthy playing the fearsome sea witch, Ursula. The rest of the cast will be made up of Awkwafina as Scuttle, Daveed Diggs as Sebastian. Jacob Tremblay as Flounder and Javier Bardem as King Triton. As mentioned, Styles’s rumored role of Prince Eric will be played by A Dog’s Way Home (2019) star, Jonah Hauer-King.

What do you think of Harry Styles dressed as The Little Mermaid?