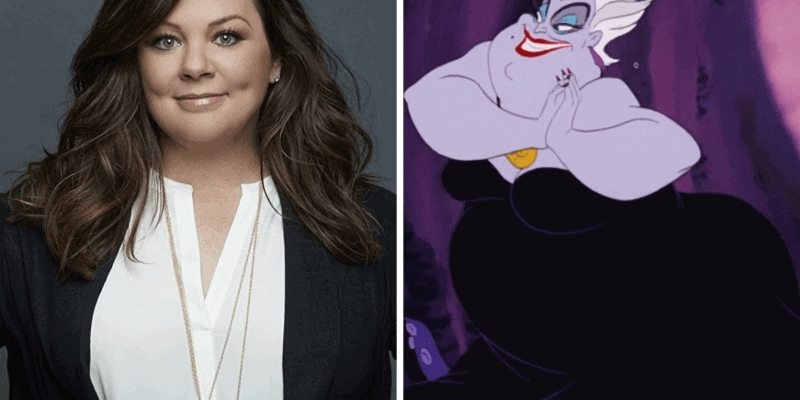 Many fans are excited for the upcoming remake of The Little Mermaid, which will be live-action and showcase a star-studded cast. Melissa McCarthy will be taking on the role of Ursula the sea witch who tricks Ariel into signing away her voice.

Ursula is one of Disney’s most iconic villains, and we cannot wait to see McCarthy play this role! Recently she gave an interview to People about portraying this fabulously fiendish character.

First, she spoke about getting back to set, filming was of course halted due to the coronavirus pandemic.

“For The Little Mermaid, hopefully, if everything is … safe, we go back to shooting in January in London,” McCarthy said. “Which is very exciting.”

Then she gave insight into how she enjoys playing Ursula,

“I have such an affection for Ursula. I know she’s the villain, but I’ve just always kind of been like, ‘Oh my god.’ I mean, she’s kind of delicious to play,” McCarthy said.

“I’m just kind of doing it as if I could be like the vaudevillian night club act that lives in my heart,” she added of how she plans to fulfill the role. “It’s just so fun, you can’t go too far with her and I’m excited to see it.”

If Melissa McCarthy as Ursula doesn’t get you excited for this movie then knowing that Lin-Manuel Miranda and Marc Platt are the producers should! Also joining the cast is Emily Coates of Netflix’s Cursed, though her role has yet to be announced, of course, Halle Bailey who is portraying the main mermaid Ariel, and more!
During the stop in production, voice-over work was eventually able to continue, as Flounder and the other under the sea fish and crustaceans will be computer-generated characters.
No official word yet from Disney on when we can expect to see this film. Stay tuned to Inside the Magic by subscribing to our newsletter below to get the latest Disney news updates!
So, are you excited about this new live-action remake of The Little Mermaid? Let us know your thoughts in the comments below!