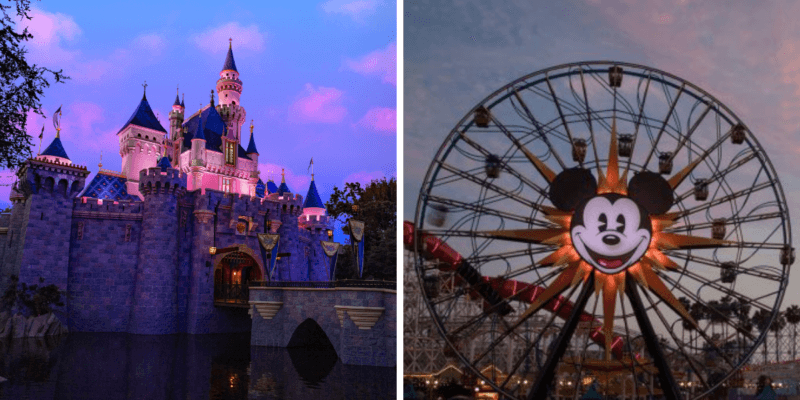 The Disneyland Resort, also known as, The Happiest Place on Earth, isn’t known for being the biggest of Disney Parks. It’s special because it’s the original place where Walt Disney put his imagination for us all to leave today and enter the world of yesterday, tomorrow, and fantasy.

How Big in Area is The Disneyland Resort?

How big is Disneyland Resort really, you ask? Well, the original Disney Park doesn’t come in as the smallest. Disneyland Park itself is the smallest of all Magic Kingdom-style parks, but with the 2001 addition of Disney California Adventure, it is now about 500 acres.

This is only counting the theme parks, but you also have the Downtown Disney District and the three Disneyland on-property hotels, the Disneyland Hotel, Disney’s Grand Californian Hotel & Spa, and Disney’s Paradise Pier Hotel.

Even though the Disneyland Resort doesn’t cover a ton of space, there is a lot compacted into one area, so how would one keep from getting lost? The Disneyland app is the best place to start. You can easily start planning your Disneyland vacation prior to even arriving, by virtually looking through the map, and linking your park ticket. It will also show wait times, as well as, any dining reservations that you have.

Though the two American Disney Parks have similarities, they’re also pretty different! There’s quite a bit of a size jump when you go from the third largest of the Disneyland Resort to the second largest of the Walt Disney World Resort.

As you can see, there are plenty more options and space at Disney World, but that doesn’t mean it’s for everyone. Some love the nostalgia and intimacy of the Disneyland Resort and that Park Hopping between its two parks are so much easier. It’s walking distance versus having to take some sort of transportation.

If a Guest wants to do separate days for each of the parks, Walt Disney World would take longer and be more costly. This could be why Disneyland has many more local Annual Passholders than Disney World as the latter caters more towards long-distance traveling vacationers. Although, it’s worthy to note that Disneyland’s Annual Passholders don’t just come from the Anaheim, Orange County area but out of state as well!

For amenities, both pretty much include the same basic just with different options. Both equally great for adults and kids are the lodging, attractions, dining, and shopping. Walt Disney World too has its own place like Downtown Disney, and that’s Disney Springs.

Disneyland and Disney World both offer great inside and outside the theme park fun! As far as choosing between which coast to head to for your next Disney vacation, it really depends on what you’re looking for. Disneyland offers all the feelings from the foundation of Disney magic. Walt Disney World is not just a theme park, it’s The Most Magical Place on Earth with so many places to explore!

Here is a list of attractions that you can find at both Disneyland and Disney World, followed by many of the ones you’ll find at just Disney World.

Disneyland Resort has 91 attractions compared to Walt Disney World’s 171 attractions. Further down, you’ll see all the ones you can find at Disneyland Park and Disney California Adventure in California.

Attractions at Both Disneyland and Walt Disney World

If a roaming area is what you’re looking for, but you also want to have traditional memories of being at the Disneyland Resort, you may want to think about spending some time at Disney California Adventure. Although in size it’s smaller than Disneyland Park, it has fewer attractions which gives it more space to just hang out and relax.

Many adult Guests do find themselves hanging out at Disney California Adventure simply because it was the first place inside the Disneyland Resort parks to serve alcohol! Even though now Disneyland Park also serves alcohol at Oga’s Cantina at Star Wars: Galaxy’s Edge, and pretty soon the Blue Bayou as well, Disney California Adventure has more places that serve alcohol.

There are places to grab a drink and lounge or Quick-Service spots where you can just grab a beer and go. Also at Disney California Adventure, there are more attractions that are thrilling, like roller coasters, which is great for adults and older children.

Though there is still plenty for kids to enjoy at Disney California Adventure, there’s so much more for the younger kids at Disneyland Park. From the slower attractions like Haunted Mansion, dark rides in Fantasyland, and Mickey’s Toontown, you can have those little ones tuckered out by an afternoon parade. There are also more opportunities to meet your favorite Disney character over where it all started with a mouse. Each California Disney theme park carries its own unique atmosphere for Disney fans of all ages to enjoy!

Here is a list of attractions at both of California’s Disneyland theme parks.

Though Park Hopping in one day is an option, to have the best experience at the Disneyland Resort, two to three days would allow you to enjoy everything. Both parks have activities, attractions, and entertainment to enjoy morning, afternoon, and evening so one day for each park gives you a great opportunity to try and fit everything in.

If you have an extra day to spend, it’s also fun to explore the shopping and dining at the Downtown Disney District, as well as, some of the restaurants and bars at each Disneyland Resort hotel, like Trader Sam’s! There is a Downtown Disney station for the Disneyland monorail where you can use your park ticket to take a ride from outside the park to inside or vice versa.

Here’s a list of all the dining options at Disneyland!

Those vacationing to the Disneyland Resort often spend two days exploring each park. There have been lots of Annual Passholders at Disneyland that will visit for a few hours to ride an attraction or two and enjoy some of those Disney Resort foods. Disney is reimagining its Annual Passport Program for Disneyland as it does for older attractions.

When planning out your Disneyland Resort vacation, it’s good to take a look at common wait times and research dining options. With the Disneyland app, as mentioned before, you can keep track of all of that right from your phone. Also, ask a Cast Member if you ever have any questions when you’re at the parks. Oftentimes, they’ll have a bunch of tips and advice to make your trip extra magical!

Walt Disney always said that Disneyland would never be complete as long as there is still imagination left. That remains to be true as Imagineers continue to develop new attractions and lands, as well as, re-imagining the older. So, there will continue to always been more to do and see at Disneyland as long as the innovation continues!

Is there something about Disneyland’s size that you didn’t know? Tell us in the comments!

Comments Off on Disneyland Resort: How Big Will Your Next Adventure Be?