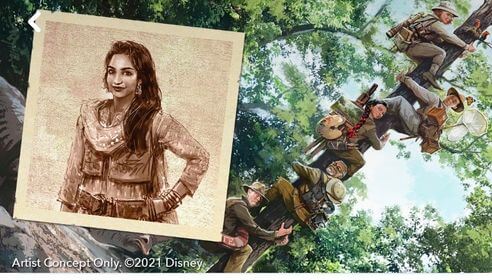 Earlier this year, Disney Parks made a huge announcement regarding a beloved attraction at Disneyland and Walt Disney World — Jungle Cruise. Elements of the popular theme park ride will soon be reimagined for Guests so they can enjoy a brand-new Jungle Cruise experience called Rivers Journey.

The attraction at both Disneyland Park at Disneyland Resort and Magic Kingdom at Walt Disney World Resort will be undergoing these changes.

We already know that Guests can expect to journey through several new scenes along the river as well as meet new characters, including Alberta Falls, the granddaughter of Dr. Albert Falls. You can read more about those details here.

So when will Guests be able to experience the new journey? Well, Disney has just confirmed today that the reimagining of the ride will debut later this year!

My Disney Experience posted the following information to the app:

As first reported in the Disney Parks Blog, one of the updated scenes coming soon to the Jungle Cruise includes a few new faces! Before you come across them on an expedition with the “Jungle Navigation Company” later this year, you can get to know them here:

And now, the five unfortunate folks run up a familiar rhino pole…

Be on the lookout for these all-new Adventureland characters when they debut in the Jungle Cruise—taking place later in 2021 at Magic Kingdom Park in Florida and Disneyland Park in California. For more information on changes coming to the attraction, be sure to check out the Disney Parks Blog!

Are you excited to see Disney reimagine Jungle Cruise? Let us know in the comments below.