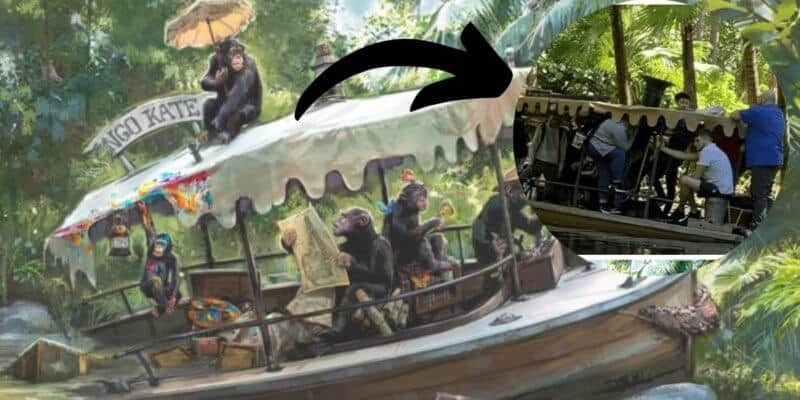 The new version of the attraction is part of Disney’s efforts to tell diverse, inclusive stories across the theme parks. Disney Parks Blog shared that the company is “building on the story of the Jungle Cruise at both Disneyland park at Disneyland Resort and Magic Kingdom park at Walt Disney World Resort to include new adventures that stay true to the experience we know and love — more humor, wildlife and skipper heart — and also reflect and value the diversity of the world around us.”

It is important to keep in mind that the name, Rivers Journey, will be the new journey that Guests will go on when they board Jungle Cruise. At this time, it looks like there won’t be a complete name change for the attraction itself.

Though many Disney fans are on board with this retheme, some are poking fun at why Disney decided to make the decision to undergo this Jungle Cruise refurbishment — and even where they think Disney may have gotten their inspiration from (or, at least, the inspiration for the concept art).

One Reddit user took to the platform to share a side by side photo showing the new Jungle Cruise retheme concept art along with a photo from last year when Jungle Cruise boats sank with Guests on board the ride. The Reddit user writes “The actual inspiration behind the Jungle Cruise update (too soon?)”.

The actual inspiration behind the Jungle Cruise update (too soon?) from WaltDisneyWorld

In case you missed it, in February 2020 one of the Jungle Cruise boats in the theme park ride in Magic Kingdom at Walt Disney World Resort sunk with Guests on board. Though the lake that the attraction takes place in is a shallow area of water, the boat still managed to fill with water with Guests inside.

Funnily enough, this Reddit user wasn’t the only one who thought of this when they saw the concept art for the Jungle Cruise retheme. Another Reddit user replied to the post saying, “First thing I thought of. Will be nice to set an update,” with another user writing, “I thought the same thing!”

It’s obvious Disney did not take inspiration from a sinking boat from a few months ago, however, the photos shown side by side do look a lot alike due to the fact that both boats are tipping over and it does give us a good laugh.

Highlights of your unforgettable adventure include:
The Mekong River: Explore an age-old shrine, home to baboons, cobras and crocodiles.
The African Congo: Cruise past a camp overrun by explosively curious gorillas.
The Nile River: Behold bathing elephants, angry hippos and hungry lions guarding a sleeping zebra.
The Amazon in South America: A canopy of green trees opens up to a native shrine, a mammoth anaconda and ravenous piranha.

The newly announced Jungle Cruise refurbishment is going to be celebrating the diversity and beauty of the world around us, as Disney continues to make strides towards moving forward and focusing more on inclusion. But, if you are worried about Jungle Cruise staying true to its roots, fear not because the best part is that the Jungle Cruise Skipper will be part of the storyline!

For more information on the changes coming to Jungle Cruise, visit our website here.

Are you excited to see Jungle Cruise get a revamp? Let us know in the comments below.