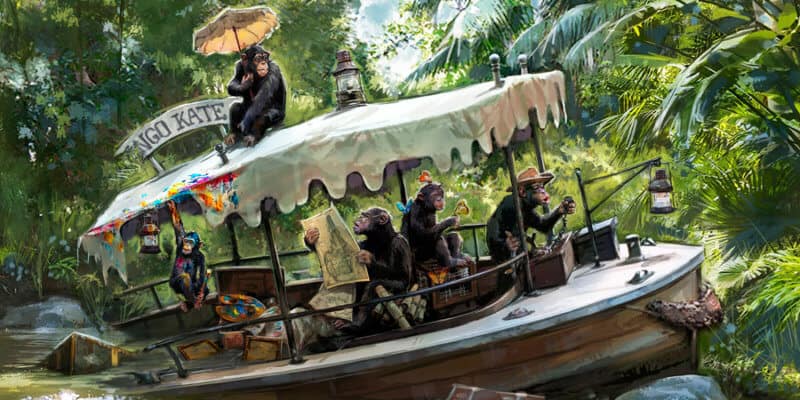 Yesterday, Disney Parks made a huge announcement regarding the classic and iconic attraction at both Disneyland and Walt Disney World — Jungle Cruise.

The popular attraction, which is an opening day ride at both Walt Disney World Resort and Disneyland Resort, will soon be rethemed for Guests so they can enjoy a brand new experience called Rivers Journey.

Please note that Rivers Journey is the name of the new journey that Guests will go on when they board Jungle Cruise. At this time, it looks like there won’t be a complete name change for the attraction itself.

Now, Disney fans are quick to take to social media to share their opinions regarding the recent announcement surrounding Jungle Cruise. Some fans are very excited about this retheme feeling as though this is much overdue, while others feel as though Disney shouldn’t be touching classic attractions.

Inside the Magic reader, Kevin R., writes “As long as they only enhance the attraction and not change it like Splash Mountain. Nothing wrong with a little update similar to Pirates. Just hope this change is for the right reason.”

Another Inside the Magic reader, Topher C., shared “Honestly if it were up to me I’d gut the entire attraction out. It takes up so much valuable land at magic kingdom (and grid locked Disneyland) that could be used for more than one brand new attraction, maybe one even jungle cruise themed in a more modern way.”

On the other hand, ITM reader Ryan A. isn’t too happy with the retheme announcement as he shared “Just kill another classic, classless”, but another Inside the Magic reader, Shannon M., shared the opposite saying “My dudes, the ride has a hugely racist section that needs taken out. It will probably just be that that they’re doing.”

Inside the Magic’s reader, Katie G. said that she is excited for the retheme, especially new jokes. She writes, “These changes sound nice. And I will gladly welcome additional jokes into the mix”.

And ITM follower Stephanie S. told others not to jump to conclusions and to watch the video that Disney Parks Blog shared. “Watch the video! It has nothing to do with extreme changes or cancel culture but additions to the ride,” she said.

Disney fans also took to Twitter to share their opinions soon after Disney made this announcement. Richy on Twitter wrote, “The mute button is your friend. Jungle Cruise is so overdue plus we’re getting a non-IP upgrade at the same time they’re releasing a movie. What isn’t to love and be amazed about?!”

The mute button is your friend.

Jungle Cruise is so overdue plus we’re getting a non-IP upgrade at the same time they’re releasing a movie. What isn’t to love and be amazed about?!

And JJ seemed to agree as he Tweeted “Jungle Cruise has needed re-working for some time. Good move.”

Jungle Cruise has needed re-working for some time. Good move.

@FairytaleHolidays admits, though a bit nervous about the makeover, the Jungle Cruise retheme looks like it will be amazing.  The Tweet reads, “Always a bit worried when classic Disney rides are given a makeover but this looks like it’s going to be amazing!”

Always a bit worried when classic Disney rides are given a makeover but this looks like it’s going to be amazing! #disney #junglecruise #makingthemagic #disneytravelagent #fairytaleholidays https://t.co/6uwpobPqOv

Inside the Magic will continue to update you as we get information regarding the Jungle Cruise update.

Jungle Cruise is an upcoming film that is currently slated to be released (either in theatres or on a digital platform) later this summer, despite being delayed twice due to complications.

Jungle Cruise is located both at Disneyland Park in Disneyland Resort and Magic Kingdom at Walt Disney World.

Highlights of your unforgettable adventure include:
The Mekong River: Explore an age-old shrine, home to baboons, cobras and crocodiles.
The African Congo: Cruise past a camp overrun by explosively curious gorillas.
The Nile River: Behold bathing elephants, angry hippos and hungry lions guarding a sleeping zebra.
The Amazon in South America: A canopy of green trees opens up to a native shrine, a mammoth anaconda and ravenous piranha.

How do you feel about this recent Jungle Cruise retheme announcement? Let us know in the comments below.