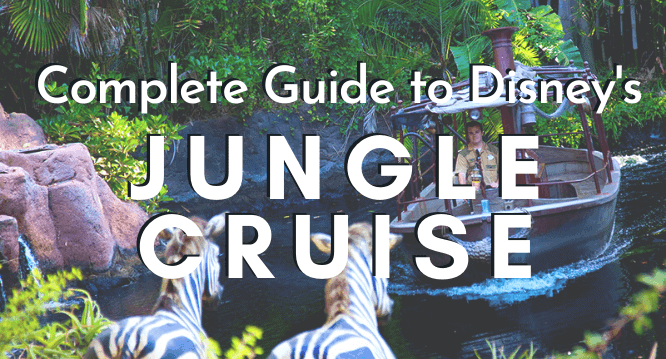 BEHOLD! The 8th wonder of the world, the magnificent, the amazing (and so on) BACK SIDE OF WATER!! Disney’s Exotic Jungle Cruise attraction has enchanted visitors since its opening day at Disneyland in 1955. That July 17, dapper Guests boarded shiny new watercraft to see animatronic animals in a leafy safari setting, and as the ride artfully aged, Jungle Cruise Skippers kept it fresh and entertained them with puns, jokes and otherwise gut-busting comments, making the attraction an Adventureland classic.

The Jungle Cruise attraction is an 8-minute boat ride through a lush rainforest-landscaped river where “Guests can chart a course for high adventure on a scenic and comedic boat tour of exotic rivers across Asia, Africa, and South America.” The river, though it looks dirty, is actually clean water dyed with a mucky green dye to make it look dirty and more like a natural river. (This is also to hide the track the attraction ride boats are guided along). Disney Guests will see assorted animatronic animals set into natural-looking settings, a temple overrun with animals, and hear plenty of jokes from live Cast Members driving the boats forward as Jungle Cruise Skippers.

Guests may note that the elephant bathing pool looks so realistic that many photos of the bathing beauties are passed around on social media posing as real elephant photos. But don’t worry, you can take all the photos you want; all the elephants have their trunks on!

Guests of all ages are welcomed onto the river cruise, and guests using a wheelchair or an ECV may remain in their seats. Sign language and assistive listening devices are available upon request. Ears to the World, Disney’s Show Translator, is capable of translating this experience into French, German, Japanese, Portuguese, or Spanish. The service is complimentary and devices can be picked up at the Guest Relations service counter at the Disney Parks.

Where is the Jungle Cruise attraction?

In Disneyland Park, you’ll find a two-tier queue next to the Tropical Hideaway watering hole as you pass into Adventureland. But don’t worry, both queues are fully accessible and Jungle Cruise Skippers will meet you at the front of the queue entrance to assist you on your watery safari.

There is a FastPass queue for this Disney attraction at both U.S. parks. While Walt Disney World utilizes a digital advance FastPass+ system, Disneyland Resort still relies on both the paper FASTPASS system as well as the digital MaxPass system. You’ll want to pay attention while you walk around in the queue for this classic Disney ride. You’ll see all sorts of jokes built into the decor as well as puns you can tell your family back home. The real treat is the queue soundtrack for the Jungle Cruise. It’s a mock-up of an old radio show hosted by Albert Awol, and is plentiful in puns, jokes, and old-timey sound effects. 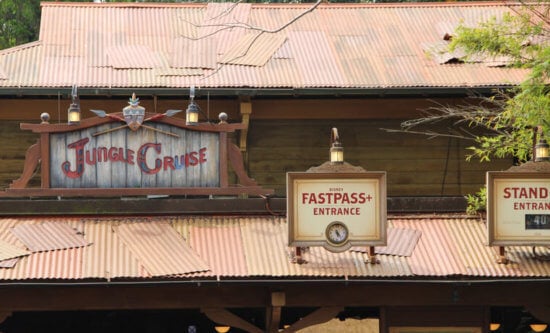 The History of The Jungle Cruise

At the time of its debut in 1955, Jungle Cruise was a novel attraction and one of the few at Disneyland that was not based on an animated film or an intellectual property. Imagineer Harper Goff was in charge of designing the attraction, most well known for his work on 20,000 Leagues Under the Sea. Inspired by the adventure film The African Queen, Jungle Cruise was originally slated to have real-life animals, as requested by Walt Disney himself. When the price and care of live animals exceeded both budget and capability, animatronic animals were chosen as a show-stopping, consistent choice. (Think about how often animals hide from us at the Animal Kingdom Kilimanjaro Safaris!)

According to the Disney Parks Blog, the greenery chosen for the lush jungle scenes at The Jungle Cruise was handpicked by horticulturist and Imagineer Morgan “Bill” Evans. “Rather than create a true-to-life jungle though, Bill’s goal was to develop a “Hollywood Jungle,” a mixture of exotic plants and trees that would give the feeling of traveling through exciting and uncharted territories. To create his Hollywood Jungle here in Anaheim, Bill developed some intrepid techniques, like smuggling plant seeds inside the cuffs of his socks and planting orange trees upside down to resemble mangroves.”

Originally planned for the area where Tomorrowland now stands, Adventureland was moved to the west side of Main Street, U.S.A., in order to use the existing large eucalyptus trees planted there by the orange farmers who previously owned the California land. As the plot developed, the trees became larger and lusher, only adding to the jungle feel. The attraction was such as hit in Southern California that another version was added to Disney’s Magic Kingdom theme park and was included on opening day at Walt Disney World on October 1, 1971.

When taking your very scenic and giggly cruise around the rivers of the world, you’ll be seated in a multi-passenger boat with a Jungle Cruise Skipper at the helm. He or She will be using a microphone and sound system to share amusing factoids, jokes, puns, and fun surprises along the way. But listen carefully: the purposefully dry delivery of the Skippers means you may miss a few jokes. This is why Disney fans want to experience the attraction over and over again. It’s also worth noting that your cruise script and mood will vary from Skipper to Skipper. Try the attraction a few times and find a Skipper near and dear to your heart!

When you board the boat, a Skipper or two will assist you into the boat and direct you to the right or left. It is important not to step over the “boxes” in the center as it is a trip hazard. If you wish to be seated in a certain area, tell the queue manager. There really is no bad seat, as the boat is open to full views on all sides. Pro tip: ride a bunch of times and experience the cruise from all angles! In 2020, clear plexiglass shields were installed in various sections of the boat, keeping passengers apart.

The Jungle Cruise boats do run on a track, similar to the Liberty Belle and Mark Twain Riverboats. But the engines are, indeed, run by the Skippers. You’ll notice the Skippers are in charge of the forward, rear and holding motions of the boat, though they may spin the “steering wheel” quite liberally.

While the boats are plenty seaworthy, mishaps happen. Disney fans may remember in February 2020, a Jungle Cruise boat sank at Magic Kingdom leaving guests with some wet sneakers and a lot of laughs. No one was hurt, and the boat was rapidly repaired and returned to the convoy. There was another boat of lesser memory in 2004, the Sankuru Sadie, that also sank at Magic Kingdom. After Sadie was repaired, she has been seen (even recently) making her way around the bend.

Did you know? The water flowing in the rivers isn’t really as dirty. Disney just adds a dirty looking dye to hide how shallow the river really is (and the track that guides the boat)! Just look at the Backside of Water gushing at Schweitzer Falls… the water is clean!

Explore the bold, flavorful cuisine of Asia, South America, and Africa with the help of daring riverboat pilots. Influenced by the attraction just across the path, The Jungle Skipper Canteen, which opened in 2015, is a flavorful dive into exotic flavor adventures while also meeting the needs of the pickiest eaters.

The Canteen has a berth-y waiting area with vintage fans and amusing decor in every corner. There are three dining rooms, each paying tribute to the Skippers who just guided you down ‘de Nile. The crew’s colonial-era Mess Hall (which is not messy at all, thank you); the Jungle Room, the former family parlor of Dr. Albert Falls himself; and the S.E.A. Room, a secret meeting place for the Society of Explorers and Adventurers. (Check out the secret bookshelf door that swings open!)

The most popular dishes on the adult main menu are the Dr. Falls Signature Grilled Steak, a delicious adobo-seasoned New York strip served with vegetables, chorizo farofa, and caramelized onion purée and red wine reduction. The light-fare sustainable fish served on a cassava cake with wilted greens and guava habanero sauce, and this writer’s favorite, Sankuru Sadie’s Seafood Stew: Shrimp, Sustainable Fish, Mussels, Bay Scallops, and Octopus simmered in a fragrant Coconut Sauce and served with Jasmine Rice (yup… this has to be a joke on the 2004 boat sinking…).

In 2013, the Jingle Cruise debuted during the Christmas season, opening at Magic Kingdom on November 8, 2013, and at Disneyland Park on November 12. In its early days, the Jingle Cruise holiday overlay mostly kept to the Guest queue area, the boathouse across the dock, and a script with holiday jokes. Later on, the Jingle Cruise overlay became more elaborate, involving extra queue decorations, a story of Santa’s plane dropping Christmas cargo all over the site, additions to the temple interior, even more jokes and fun Cast Member costume additions.

The yuletide overlay continues to get more creative, and fans continue to become more endeared to the holiday version of the attraction. Walt Disney World fans may remember the outrage that was sparked in 2017 when rumors that Jingle Cruise would not return. Fears were assuaged shortly thereafter when the company confirmed its return. (In 2019, the overlay was not present at Disneyland Resort — be sure to check each park’s holiday lineup every year to see if Jingle Cruise will be available.)

As of the present day, the Jingle Cruise set has become extremely detailed. You’ll see not only additions to the set but also literal overlays to typically existing items. Various rustic Christmas trees dot the queue, and you may see an ethanol dispenser that reads ETHANOL altered to say ETHANOEL EGGNOG.

Observant guests will notice the names of the Jungle Cruise boats are altered with new/changed names like Garland Gertie, Icicle Irma, Poinsettia Sal, Yulelog Lolly, Candy Cane Connie, and Mistletoe Millie. It appears that the skippers made cheap yet heartful changes to the boats for the holiday spirit.

Be watchful as you make your way around the rivers of the world, as you’ll see SANTA STOP HERE signs, Santa’s workshop elements, and even a north pole where the safari group climbs. My personal favorite is the costume additions to Trader Sam, who is now called “Trader Sam-ta” and might bring you a shrunken head for your stocking…

Disney’s Jungle Cruise movie was filmed in Hawaii and Atlanta, GA in the summer and fall of 2018, but the film’s release has been delayed until 2021. The film will star Dwyane Johnson as Skipper Frank Wolff, and Emily Blunt as Lily. Billed as a “period piece” set in the early 20th century, the Disney attraction comes to life as a riverboat captain named Frank takes a scientist and her brother on a mission into a jungle to find the Tree of Life. In the African Queen-style film, the trio of newly turned explorers must fight against dangerous wild animals and a competing German expedition with possible supernatural forces and innumerable dangers.

The most groundbreaking news to come out of the creation of the film is that the Disney attraction, Jungle Cruise, will be reimagined with the help of The Rock, hopefully tying the film into the river journey (much like Pirates of the Caribbean did with the film franchise). Disney has yet for provide further details of this.

Disney’s Jungle Cruise has continued to enchant the hearts and minds of Guests from all over the world since 1955. Through its growth and humorous nature, the ride has inspired merchandise, a holiday overlay, mugs, a restaurant, and more. chEARS to the Jungle Cruise, we’ll never take it for granite!

What do you love most about The Jungle Cruise? Leave us a comment below, and HIT IT SKIP!