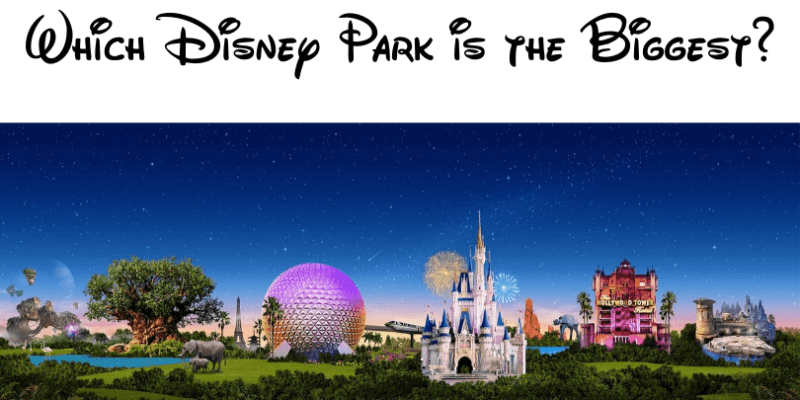 Disney theme parks are constantly expanding in size. The Imagineering team does an amazing job at coming up with new creative attractions for us Disney fans to enjoy when we head to the Disney Parks.  So why are there so many Disney Parks and why are they all different sizes?  Because they’re all unique in their own way!

Yes, there are some similarities between the Disney Parks.  The reason that many Disney fans have it on their bucket list to visit every Disney Park around the world is that they have their own quirks.  Each of the Magic Kingdom style parks has its own version of a Disney castle.  And since they’re in different parts of the world, part of the surrounding area’s culture gets pulled into the parks as well.

In the order of smallest to biggest Disney Resort:

So as mentioned before, each of the Disney Resorts has its own Magic Kingdom castle.

Hong Kong Disneyland’s Sleeping Beauty Castle is the smallest of castle and looks very similar to the original at Disneyland Resort, but a redesign is in the works as it will soon be transformed into the Castle of Magical Dreams.  The largest Disney castle is the Enchanted Storybook Castle at Shanghai Disneyland.  Each of the six Disney Resorts has an entrance to one of their parks featuring a floral Mickey Mouse.

Every Disney Resort has a Main Street, except that at Tokyo Disneyland it’s called the World Bazaar.  Most of the Magic Kingdom-style parks have a railroad that runs around the park, but Shanghai Disneyland does not have one yet.  Many also have an “it’s a small world” ride in honor of the World Showcase.  Just think about it, “it’s a small world” is the connection we all have as Disney fans.  We all just want a little bit of that Disney magic.

Coming in at the smallest is Hong Kong Disneyland, which opened in 2005.  Though it has plans already for expansion over the next few years, it still has some catching up to do in terms over reaching the size of the other Disney Parks.  There isn’t much open land in Hong Kong itself where it’s located on Lantau Island.

At Hong Kong Disneyland, with their expansions on the horizon, I think they’re about to set themselves a little more apart than the original Disneyland soon. Pretty soon they’ll have a Frozen land with all new attractions.  They too are known for some really adorable merchandise and great souvenirs to bring home from your trip!

Related: STUNNING: It Snowed At Disneyland Paris And We Can’t Get Enough Of These Pictures!

For a first visit to Disneyland Paris, it would be interesting to just ride some of the rides that you would at the other parks, but narrated in French!  How interesting would that be?  But don’t forget to get out Ratatouille: The Adventure.  France is home to Remy and so it’s in his element!

In 1983, Tokyo Disneyland opened in Urayasu, Japan just a train ride away from Tokyo.  Tokyo DisneySea was later added to Tokyo Disney Sea, but Tokyo Disney Resort both sit neck and neck for the third and fourth place in size, as both are around 500 acres.

Related: Tokyo Disney’s New Beauty and the Beast Castle: Gorgeous Inside and Out!

At Tokyo Disney Resort, Tokyo DisneySea is the colorful place to be.  It’s similar to EPCOT in that it feels as though you’re traveling around the world, but it’s definitely more fantasy.  Tokyo Disneyland is also known for having the most unique and cute merchandise.  Japan is known for its anime so it’s not a surprise that its merchandise is so popular.

The original 1955 Disneyland park is actually the smallest of the Magic Kingdom-style parks.  The reason why the Disneyland Resort is in the middle of the pack now is because it has the Disney California Adventure park, too.  There’s a lot of nostalgia here that makes the Disney Resort in Anaheim, California always feel like home.  There’s also Downtown Disney right in that same condensed area so all three places are very easily accessible.

At California’s Disneyland, being the original already makes it the most special.  It’s the foundation of all of Walt Disney’s imagination that made all the other Disney Parks and Resorts possible.  It has the original Frontierland, Fantasyland, and Tomorrowland.  Be sure to head over the Disney California Adventure and hop on the Pixar Pal-a-Round at Pixar Pier! 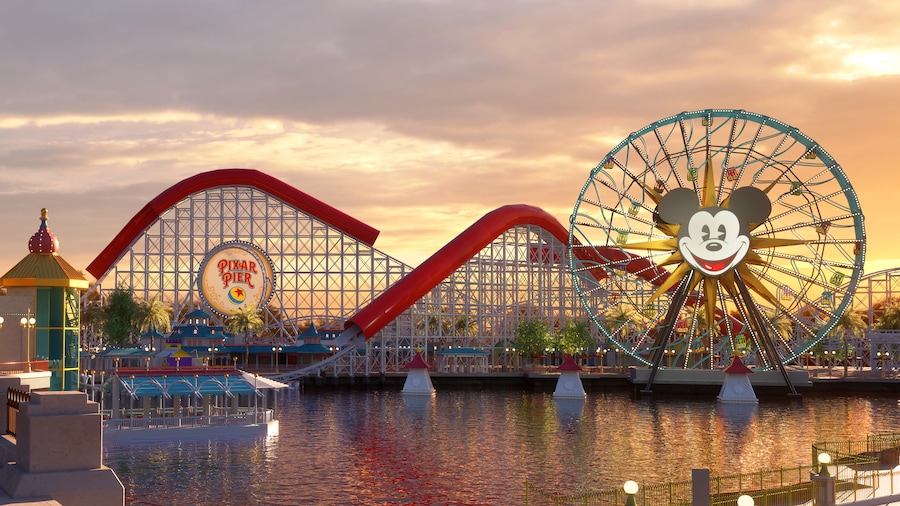 The newest of Disney Resorts is the Shanghai Disneyland which opened in 2016.  It’s the park that covers the most land.  Though it doesn’t have as many attractions as some of the other Disney Parks, but we’re sure it’s going to have a ton more with the amount of space they have to expand into.  Shanghai is split into two sides: north, Pudong, and south, PuXi.  The Disney Park is located on the PuDong side where the airport is also located.

Related: Capturing Disney Magic Within the Culture of Shanghai Disneyland

At Shanghai Disneyland, I would make it a point to spend some time at the Enchanted Storybook Castle.  It is the largest of the castles after all and there’s much to explore there.  The walkthrough will be a very special experience all in itself.

Finally, the largest is the Walt Disney World Resort because of its four theme parks: Magic Kingdom, Disney’s Hollywood Studios, EPCOT, and Disney’s Animal Kingdom. All of these parks are located in Orlando, Florida with Magic Kingdom starting operation in 1971.  There’s also Disney Springs which is similar to Downtown Disney in Anaheim, as well as two water parks and so much more.

Walt Disney World definitely is the most unique with its four parks, but one of the greatest attractions is the Kilimanjaro Safari at Disney’s Animal Kingdom, the largest of the four parks.  Disney does a lot of animal conservation work and research.  It gives us a better understanding of wildlife and how to better take care of them.

So next time you’re on a Disney vacation, really soak in the Disney magic that sets the Disney theme park apart from all other theme parks.